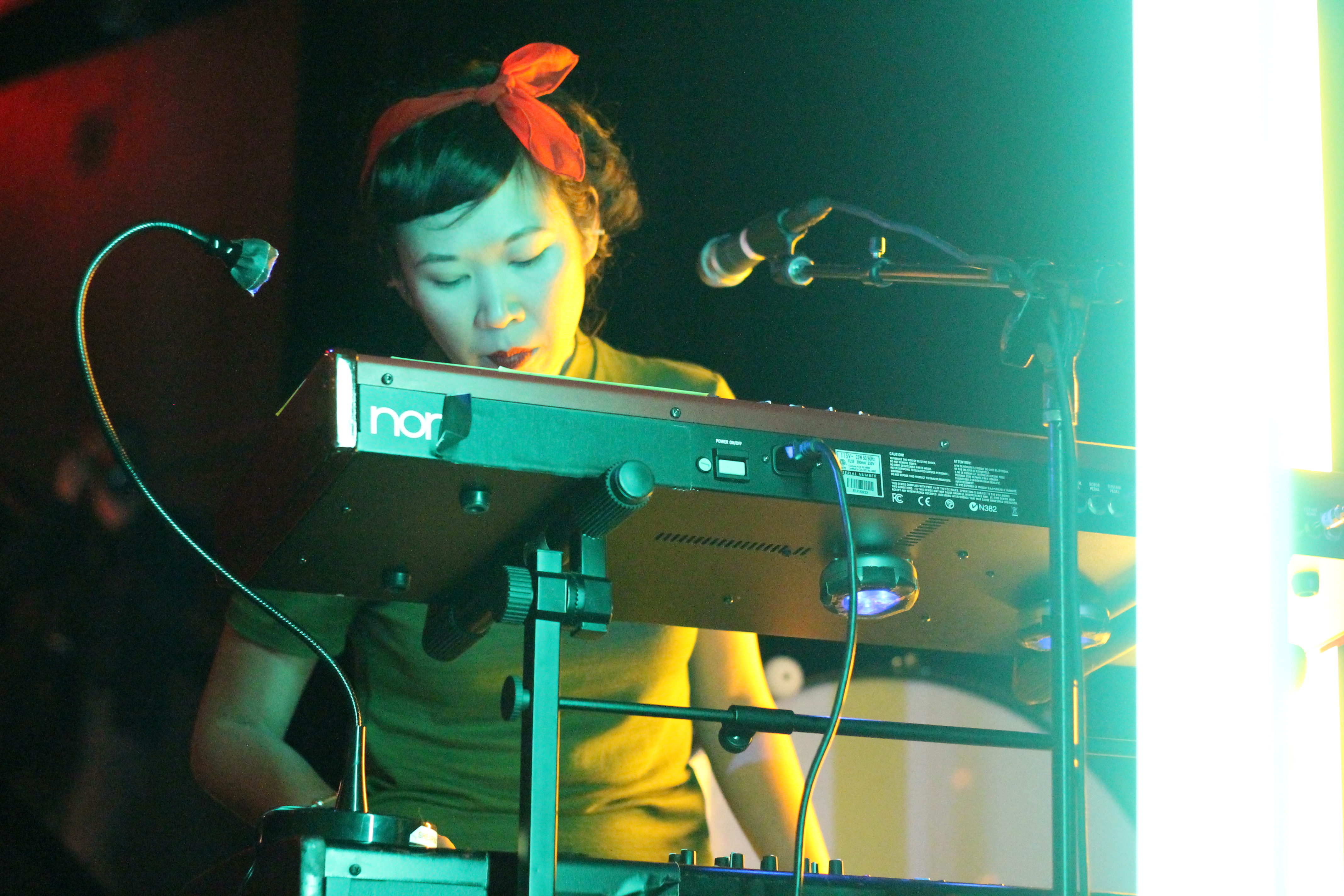 When I was an undergraduate, I had a crazy idea to try and interview one of my favorite musicians, Jonathan Meiburg of Shearwater. We had both attended the same small liberal arts college, tucked away in the deep forests of the Cumberland Plateau in Tennessee, and as a senior and editor-in-chief of our college newspaper (which he once ran himself), my thought was, “Why the hell not?” Little did I know that a few years and a handful of Shearwater shows later, that conversation would not only lead to a new friendship, but even more opportunities to get to know some absolutely amazing folks.

Emily Lee currently plays the keyboard and provides backup vocals for Shearwater. After witnessing her hypnotic on-stage presence (and being inspired by her killer vintage style) at the Roxy in Los Angeles, I had a feeling she’d be a perfect interview for this column. Lee was kind enough to take some time from her Shearwater duties—which currently involve a cover of David Bowie’s Lodger (in its entirety) for A.V. Club’s Undercover series—to talk music, mentors, and being one of two badass minority ladies in the band.

Tell me a bit about your background and how you got your start in the music industry. I grew up playing piano and violin. My parents were not that strict about practicing or anything, which I think was a little bit of a detriment to me, as I got better without practicing. I always think that I might be a famous concert pianist right now if I had only devoted a little more time to it.

I went to Barnard College and majored in music theory and composition. After college, I got a job as a music specialist at WNET, the PBS station in NYC; I’m basically a music supervisor for the company. Also after college, I started to experiment with playing in groups that were not classical. I was an accompanist for my friend’s off-off-broadway musical, and I got involved with a few rock bands.

It’s nice being on two sides of the music industry—the creation side as well as the music supervision side. I never thought that the creative side would develop into a career, but it feels like it’s starting to get there.

Did you have any mentors or idols growing up that helped you pursue a career in music? I was very much encouraged by my piano teacher as well as my high school orchestra teacher. They both really seemed to see a little bit of talent in me and encouraged me to use it. My father has also been a big influence on me as he’s a music lover. He appreciates music of all types, and he’s taken me to many rock shows, classical concerts, operas and jazz shows through the years.

How did you get involved with Shearwater? My involvement with Shearwater is thanks to a random tweet I sent out as I rode the train to New Haven up from NYC to practice with my own band, Snake Oil. I had been listening to my iPod on shuffle, and a Shearwater song came up (probably “Hail, Mary”) and I tweeted about how my dream would be to play keys, sing backups and make noise in Shearwater. Two days later, Jonathan wrote me an email. I was completely surprised. I couldn’t join them for the tour he was putting together at that time, but a couple years later, he sent me another email. I was again completely shocked, but this time, my friends, family, Facebook friends, co-workers—literally everyone in my life—told me that I should do it. When does the opportunity come to play and tour in your favorite band?

Growing up as an Asian-American, it was a bit disheartening to discover that minority ladies (Asian women, even more so) in the western music industry seemed so few and far between. Granted, a handful of names—M.I.A., Karen O, Kazu Makino, and Nancy Whang, to name a few—have achieved notable visibility in recent years, but it still appears that the industry disproportionately features white dudes with guitars.

Not that there’s anything wrong with these white dudes and their guitars, but representation is important since minority women have their own unique stories to tell. As an insider, what are your thoughts on this topic? As an Asian-American woman, I definitely feel like I had very few people whom I could point to who had the career path that I actually wanted. I think that’s why I was so focused on classical music for so long. I mainly listened to rock music growing up, but I never thought that it was something I could do—whereas there are a ton of Asian-American classical pianists and violinists, and I knew that was a doable path. I said to others that I dreamed of being a classical pianist, but deep inside, I wanted to be in a band—I mean, the “white dudes with guitars” were the musicians that I actually listened to.

I still think that this industry is heavily slanted in that direction (within bands, but also in every other part as well). That’s one of the things I really love about this line-up of Shearwater. We have two minority women in the band—I feel like that’s unheard of. And we’re both very skilled and technical players. Sadie and I love when other women come up to us at shows to point out how cool it is that we’re representing within the band. That makes playing in the band doubly meaningful to us.

What’s up next for you? I’m currently grappling with the question of forgoing my day job to have more flexibility to tour and do other projects. I love my work in music supervision, but it’s been difficult recently to reconcile the 9-5 job with the need to go away for weeks at a time. If I do wind up as a freelancer, I hope to work on my own music and take on some music supervision projects in between stints on the road. Or, I’ll become a cat sitter. You never know…

Update: A few days after I received her responses, Emily posted some exciting news on her Facebook:

I guess it’s time to go public? On this first day of the next year of my life, I want to let you all know that I’ll be leaving my treasured and amazing job at Thirteen to become a professional musician and freelance music specialist.

It has been an incredibly difficult decision, and honestly, I was really hoping that my job would have given me the flexibility to pursue my music career while still being able to work at the place I’ve called home for the past 16+ years. But sadly, that was not to be, and so I’ve handed in my notice.

I love my job. And I love WNET. (I’ve loved this place since I was barely able to walk/talk.) I put so much into doing a great job, and I hope to be able to serve outside producers with the same speed, attention to detail, organization and creativity that I have here. I will miss each and every one of my co-workers.

But, I am excited to be able to go on tour in my favorite band without trying to figure out logistics of vacation days.

My last day is June 7th. I go off to Europe with Shearwater on June 9th. Please help me with this transition, as I am counting on you guys to be my cheerleaders once again.