Fringe Benefits: A Review of the Hollywood Fringe Festival 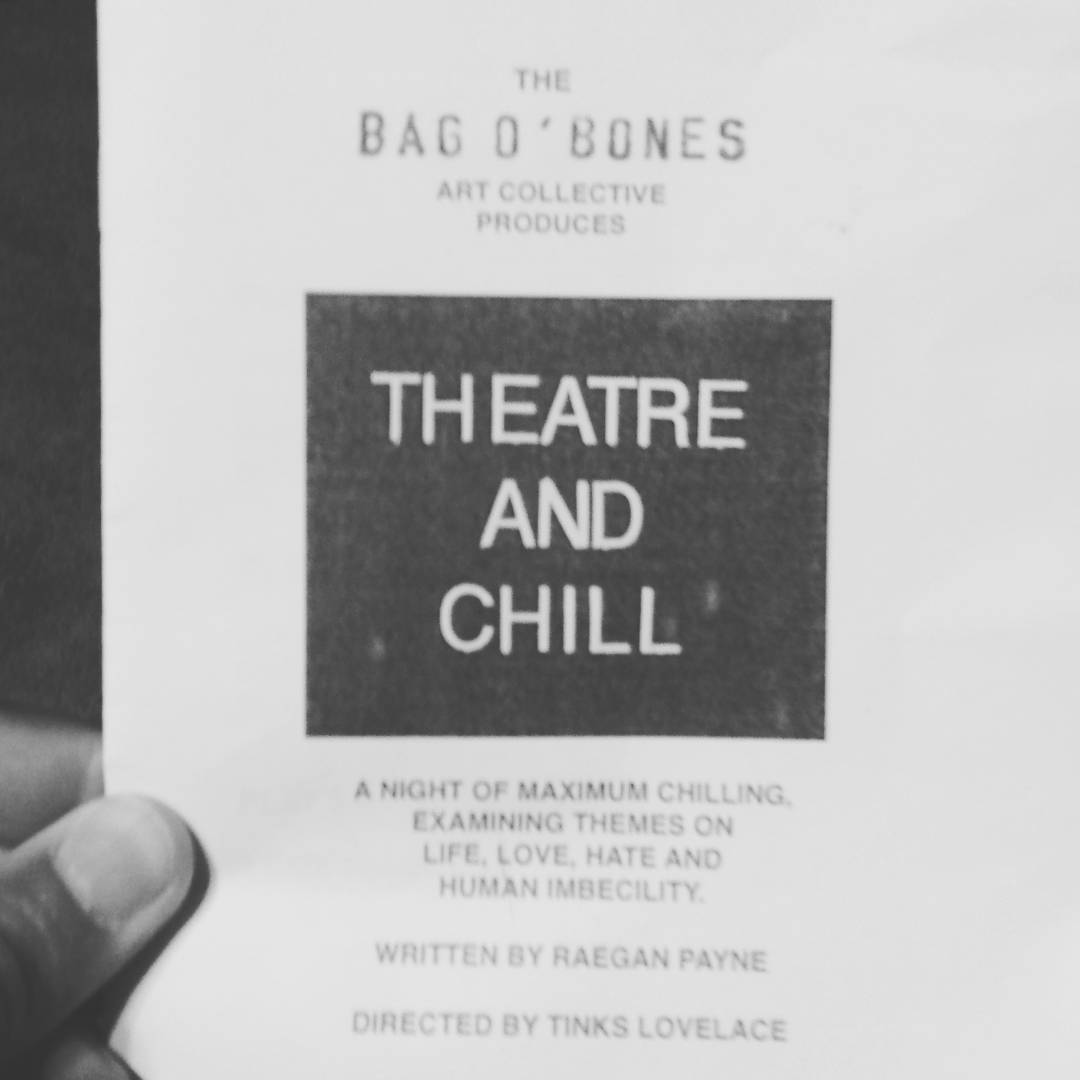 In the month of June, I attended three productions at the Hollywood Fringe Festival. Truthfully, I didn’t know if any of them would be worthwhile, considering it was a little difficult navigating the Fringe’s seemingly never-ending schedule online. There were so many shows listed, I didn’t know what to choose or how to even begin to think about choosing. After sleuthing around in some early press releases, I found one that attracted my attention and committed to another that sounded highly artistic. While the third happened completely by chance, I received it just the same as the other two.

The first on my personal schedule was Uterine Affairs (written and directed by Céline Nyanga), an experimental play inspired by the French absurdists. The promotional posters and fliers were catchy in design, promising “a hilarious play full of senseless situations and illogical speech.” Mariana Montes stars as Mary Joan Holy, a pregnant virgin who travels on a literal and metaphorical journey through strange places, meeting even stranger characters who try to control her choices along the way. The young Mary seeks an abortion, but everyone around her either actively or indirectly prevents her from reaching that goal.

As a loyal fan of the Theatre of Absurd, I found Uterine Affairs enjoyable for the most part, especially in the central premise and performances. Montes is a powerhouse in the lead role, delivering the exact range of emotions one would feel after being diagnosed with “the Inconceivable Conception!” When Mary faces grave consequences for her autonomous actions, Monte’s body slumps in defeat. When Mary finds even a sliver of hope in her bewildering world, Montes’s face shines giddy with glee. Most importantly, when Mary can’t understand why such ridiculous situations are happening to her, Montes’s furrowed expression alone can crack an eruption of laughter from the audience.

Overall, Uterine Affairs is a commendable example of post-modern absurdist theatre that serves to challenge thoughts on binary systems and social expectations for women today. Though often didactic in approach–especially in Mary’s lengthy soliloquy towards the end–the play retains insightful elements within the dialogue. Most of the banter hit the themes right on the mark, while other lines faltered due to an actor’s off-timing delivery or exhausting absurdity simply for the sake of being absurd. Regardless, I must admit that my favorite aspect of the play occurred before the actors even appeared on stage. As I wandered to find my seat, I was given a small bag of yellow hard candies shaped like ducks. I would later find out that Mary uses a rubber duckie in a surprising way to discover the sex of her child. Just like her, I was shocked by the revelation, but also, just like how I felt about Uterine Affairs as a whole, I appreciated the audacity and inspired creativity.

The second play I attended was Duality (co-written and directed by, and starring Marianne Lu), a one-act play merging physical theatre and drama. Told through flashbacks and musical sequences, the story surrounds the life of Caroline (played by Lu), a dancer struggling to cope with her familial past. Caroline’s mother, Regina (the present version played by Maggie Dewan-Smith and the past played by Tania Camargo), has always been resentful of her daughter’s carefree nature, while her father, Jake (played by Brian Ramian), is supportive of her creative pursuits. Duality touches on the effects of time on relationships and love, narrowing in on how it changes and challenges an individual.

Perhaps the most interesting aspect of Duality is the performance venue. The play took place at the main stage of The Hotel Café, an intimate setting with limited seating, a minimal stage tucked away in the front corner, and a functioning bar overtaking the rear. In regards to theatrical venues, the physical space itself is awkward and clunky, providing little room for movement and obscuring much of the audience’s sightlines. However, the reason why this space works is because the play’s settings are primarily inside a bar and a café. Rather than hindering the production entirely, The Hotel Café instead constructs a lively and refreshing atmosphere that remains appropriate for the story.

While Duality sometimes teeters on cheesy melodrama, its salvation lies in the honest performances by the talented cast and unique film-esque presentation of the narrative. The title of the play is more than just an ode to the argument of nature versus nurture, but also speaks to the duality of physical reality and inner life. “This is not a stage!” Regina yells at the young Caroline (played by Danielle Smith) when she continues to disobey her mother’s wishes and dances to the rhythm of her own music. Nonetheless, even in this moment as a lost child, Caroline is well aware that they are in fact one and the same. Duality is an impressive piece by Lu that prompts us to take a peek inside ourselves and reflect on what it is that drives us to perform our truest passions.

The final play in which I had the pleasure of seeing was Theatre and Chill? (written by Raegan Payne and directed by Tinks Lovelace), a series of short plays contrasting the previous two in presentation and tone but matching them in themes and intent. The first in the series is “Sweet Nothings,” a dialogue about sexual discoveries and disappointments among three roommates. The second is “Ill Informed,” a heartbreaking story about a confused stalker and the even more confusing life of the woman being stalked. The final play, “Things Unsaid,” is a hilarious verbalization of subtext found within the conversation of a date.

Even though “Sweet Nothings” is a bold and exciting opening to the night, it felt under-directed at times. With one character offstage, roommate Christina (played by Francesca Gámez) primarily center stage, and the less-tolerable roommate Rob (played by Eric Toms) entering in the middle of the story, there could have been far more possibilities in terms of movement and exchange of physical and verbal expressions among the actors. Furthermore, “Ill Informed,” although unoriginal in storyline, is surprisingly relatable, exploring subjects beyond obsession and encounters with strangers. The play touches on a central problem found in all relationships, involving one imposing unrealistic ideals on another. Similar to the way Owen (played by Doug Harvey) instinctually admires Olivia (played by Jess Nurse), we often have a tendency to romanticize a partner to the point where he or she has become a work of fiction, rendering us incapable of ever forming substantial, lasting relationships with the one we love. Along the same vein, “Things Unsaid,” feels the most relevant within the contemporary dating world of today, demonstrating how we never really say what we mean or vice-versa. Bill (played by Peter Madison) is the stereotypical male who isn’t ready to fully commit in this story, and Margaret (played by Hayley Perkins) is his unfortunate victim. However, B (played by Lovelace) and M (played by Jordan Coffeey), the objective narrators of the date who also sometimes functions as the couple’s thought processes, reveal that relationships are more complicated than just being in or getting out.

In its entirety, Theatre and Chill? plays out exactly how it should. The line-up is smart, with the most daring and comedic piece opening with a bang, and the final two leaving the audience in deep thought and laughter. The writing of all three is quick and sharp, with the dialogue feeling natural but provocative. Moreover, the ensemble cast is superb, particularly Nurse and Harvey as wandering souls yearning to love and be loved. By the end of the night, my date and I left the theatre feeling like we had just watched a variety show on Netflix that we would later recommend to our friends. Most of all, we so wished there were more episodes in the play series to binge. We certainly could have sat through another season.

The Hollywood Fringe Festival is truly a hodge-podge of creative endeavors that celebrates what people love about this TV and Film town in its most basic element: performance. The Fringe is certainly experienced best by attending a range of the many genres represented, from laugh-out-loud comedies to heart-tugging dramas to bizarre experimentals. It’s one of the many gatherings in LA that continue to bring artists and friends of art together in a theatre on an annual basis. For next year’s festival, you can bet on finding me at one of the musicals.