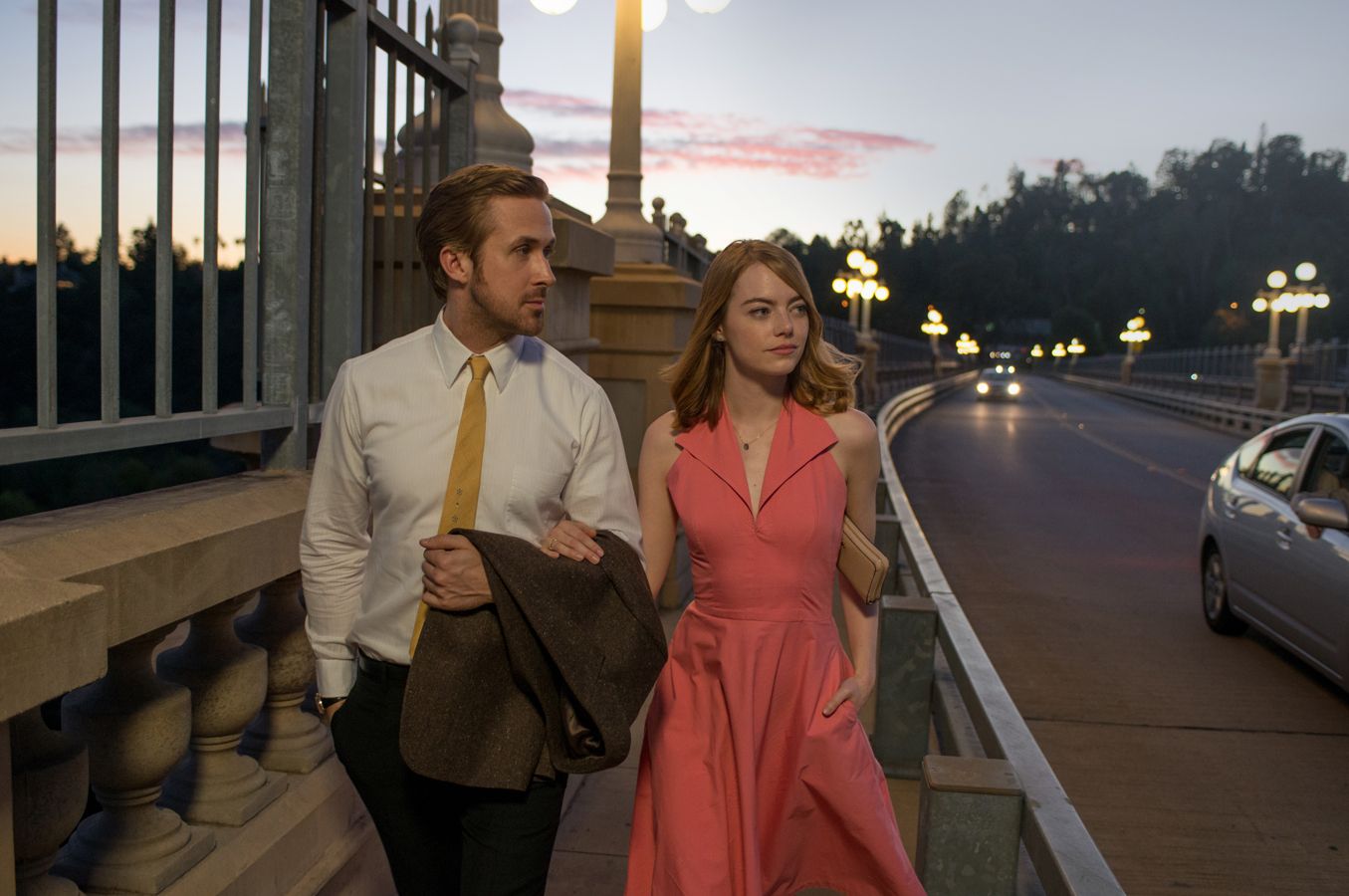 Since moving to Los Angeles six months ago, I’ve dreaded the question, “So how are you liking it so far?” My answer always gets convoluted between how much I like the sunshine but miss the seasons or how I love that there’s always something to do but hate how long it takes to get there. The truth is I feel conflicting emotions about this city. Some nights I feel invincible driving past illuminated skyscrapers in DTLA as KCRW fills my car with a new age soundscape. Other times I feel small at a coffee shop drafting my next screenplay, while everyone else around me seems to also be writing and drinking overpriced lattes alone. L.A., as I’m starting to learn, is a paradox. But maybe that’s part of its charm. At least, that’s how Damien Chazelle seems to paint it in his latest film La La Land, of which I happened to catch an advanced screening at Hollywood’s Harmony Gold. With Bradley Cooper, Emma Stone, and Chazelle himself enthusiastically presenting, I was open to giving this city another shot.

La La Land begins where most of us begin our mornings: stuck in traffic. In one mesmerizing swoop of the camera, about a hundred daily commuters burst out of their cars to sing a ditty about the California sunshine in a dance number you just have to see to believe. And then a title card emerges: WINTER. This is the first instance of irony that sets the tone for the rest of the film’s electrifying 128-minute duration. La La Land isn’t just another musical, though it’s marketed as a throwback to the classics.

Set in modern-day, the film is filled with that old Hollywood soundtrack from the Golden Age. The whimsical musical numbers narrate the romance between an budding actress named Mia (Emma Stone) and a disillusioned jazz pianist Sebastian (Ryan Gosling) as they struggle to make it work in Hollywood. Although dramatic in presentation, their year together is filled with as much delightful humor as Stone and Gosling’s previous on-screen relationship in Crazy, Stupid, Love. They are young, attractive, and like most of us who made the big move to the City of Angels, they’re feverishly holding on to a dream. Of course, nothing comes easy for these two as their paths in life diverge the closer they are to reaching their separate destinies. Rest assured, from the moment they first tap dance at Griffith Park overlooking dreamy night views, their romance is one for the ages.

From scenes about parking violations and spilling coffee, Angelenos (or even transplants like me) will certainly get a kick out of the many satirical quips throughout the film. Nonetheless, Chazelle cracks these jokes with warm sincerity; he is laughing with us because he probably has experienced these same frustrations himself. In fact, it is within misfortune that the story really blossoms. If it wasn’t for Mia’s string of bad auditions and disappointing nights out with her roommates, she would never have run into Sebastian as he sits at the piano of a restaurant, wallowing in his own bad luck. Initially averse to each other’s company, it will take another fateful encounter at a trendy pool party to bring these two lost souls together. Chazelle, who also penned the screenplay, gives them a silver lining here. Stars just might be aligning behind the L.A. smog.

Unsurprisingly, both Gosling and Stone deliver in their respective roles (we’ve witnessed their irresistible chemistry before), but neither are powerhouses as singers by modern musical standards. Instead, their voices are soft and endearing, like a sweet lullaby drifting through the congested city. This sweetness is cut by a loud color palette that draws attention to what we might typically miss looking out of our hazy car windows. Skies are painted in a gradient of blues, practical lights glow in neon greens, and ordinary Mia dazzles in a bright yellow party dress. Even the dizzying camera movements and rapid editing make banal montages feel oh-so-thrilling. In a scene where Sebastian explains to Mia the value of jazz music, she wonders, “But what about elevator music?” Sebastian simply shakes his head and tells her, “People just don’t know where jazz comes from. They don’t know the history. They’re not given context.” In the same way, Chazelle seems to be showing us the overlooked marvels of Los Angeles.

The music and performances are truly the stars of this production, elevating what would otherwise seem like a clichéd romantic comedy. Chazelle spent six years working with Justin Hurwitz—his composer friend from their Harvard days—to capture the sentiment of being in love and having a dream. The film’s theme song, “City of Stars,” is a haunting ballad that expresses what most of us experience trying to make it in this city. And as heartbreaking as that final sequence in the film might be, there is something beautiful about what comes of Mia and Sebastian’s journey together. Los Angeles can be stuffy and overwhelming at times. We get stuck in traffic. We take up embarrassing gigs just to scrape by. But the city also boasts opportunities and surprises, if only we don’t lose sight of its magic.

La La Land, directed by Damien Chazelle and starring Emma Stone and Ryan Gosling, is out now in limited release and in wide release on December 16.