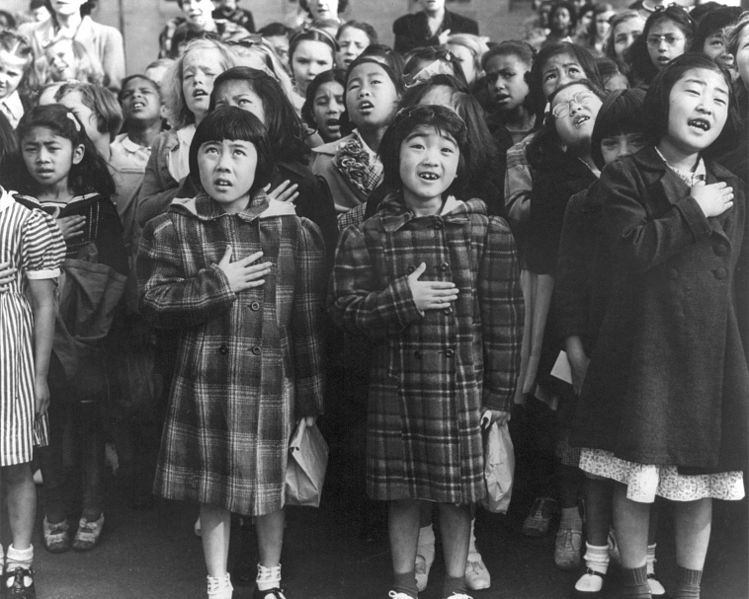 This essay was originally published by the literary journal Rock & Sling in Vox, a special edition issue on the 2016 presidential election. You can get your hands on this issue, as well as the upcoming Vox II: American Identities by visiting their online store.

“You can color in the bubbles for me,” Courtland offered, sliding the ballot across our kitchen table.

I looked at him, horrified. “That’s fraud!”

“Only joking,” he said. “I’ll let you wear the sticker though.” He held up the small white oval stuck to his thumb.

Peeling the sticker off of his finger, I noticed that the Los Angeles edition was different than the kind I had seen growing up in the South. Instead of the standard blue letters stating “I Voted” across a waving American flag, this version translated the words into six other languages including Tagalog, my native tongue. “Bumoto Ako” was emblazoned across the bottom of the oval.

“Makes sense,” I thought, considering how frequently I overhear conversations in Tagalog while walking around the area. On the bus, at gas stations, and without fail, every time I approach the free samples table at Costco. But no matter how accommodating L.A. County may be towards Filipino immigrants, no matter how well I can mix into the melting pot, I can’t claim to be Filipino-American, much less American in general.

I stared at the sticker. Bumoto Ako, it said.

But I didn’t, I thought in response.

“It’s not the same,” I groaned out loud. I placed the sticker on my forehead as I walked away, leaving Courtland to sort out Senator X from Representative Y, Measure M from Proposition HHH.

“Did you register to vote yet?”

I dread election season. Like millions of other immigrants such as myself, I loathe having to listen to politicians deliberate on our relative worth, like we’re abandoned dogs waiting to be admitted to a shelter. Ban them all, there’s no more room! Take pity on them, they just want a better life! Keep only the young ones ’cause the adults can’t be trained! We don’t know what kind of diseases they carry—think of the children!

But the thing I dread the most doesn’t have anything to do with politicians or their opinions at all. Well at least, not directly. “Did you register to vote yet?”

I suppose this question isn’t an unreasonable one to ask of a fairly liberal, politically active writer, particularly one who speaks with a neutral American accent that has been described as “straight out of Sesame Street.”

I never know how to answer. If I say, “I’m not an American citizen,” this tiny nugget of personal information almost always turns into a half-hour long discussion about how the American immigration process works—“Yes, I’ve lived here that long,” and “No, I don’t get automatic citizenship because I’m married to an American,” and “Of course, the citizenship application costs that much.” Or worse, my simple “no” is met with a look of bewilderment, disbelief, and utter disgust. People who ask this question are not exactly the type to answer, “Me either.” This compels me to again put on my best college professor impression and outline the immigration process to someone who probably only wanted an alternative discussion topic to the weather outside.

It’s not the mini-lecture I dread. It’s the follow-up questions. “Why aren’t you a citizen yet?” or “When are you going to apply?” are the most common. The firm belief that duh, of course you want to be an American never ceases to surprise me.

I didn’t exactly have a say in coming to America. In my case, as a typical eleven-year-old faced with a big move, I was actively against it. I screamed. I cried. I tried to run away. I came up with a plan to live with my relatives, who would take rotating shifts to serve as my surrogate parents until my own realized the error of their ways and moved back to the tropics. But alas, I failed. My mom zipped me into a puffy turquoise snow jacket, buckled me up for a 21-hour plane ride, and prodded me through the never-ending “New Arrivals” line at the Detroit airport one snowy winter day, the first day of the rest of my new life.

I didn’t choose to come to the United States. That being said, this country has been my home for almost fifteen years—far longer than any other. My immediate family lives here. Most of my friends live here. I’ve even started a family of my own in a little apartment by the Pacific Ocean. Well, right now it’s just two people and one cat, but we might add a few more four-legged critters to the mix. At least, that’s the goal according to Article I, Section 1.1 of my personal five-year plan. In contrast, citizenship is somewhere in the draft stages of the plan’s Amendments section. Early draft stages.

So why not apply? For years, it’s been a matter of money. One does not casually fork over $680 like it’s a free paper napkin. But, at some point in the past few years, right around the time I became eligible for citizenship, I reached a turning point in my post-grad life and managed to make enough for a trip to Paris and London. So there goes that excuse.

Another viable explanation I often use is the time commitment. This kind of application, you know, the type to ask you to list every single group you’ve been affiliated with in your whole entire life—service organizations, volunteer corps, drinking clubs, Ravenclaw, Hufflepuff, Gryffindor, or Slytherin—can’t be completed in an afternoon. It can’t be done in five. I need time, lots of it, enough for snack breaks and naps in between. And as a full-time graduate student with a part-time job, an internship, and a husband and a cat to take care of, spare time is a luxury. A luxury designated for doing laundry and dusting the bookshelves—not for typing marathons on Adobe Acrobat.

But then again, I did find enough time to go to Paris and London.

It’s an intangible, yet no less defining characteristic that shapes who you are as a person and how you view the world.

Truth be told, it’s a bit of both of these things. No, I certainly don’t have $680 or twenty hours of free time handy in my back pocket. But if I had to choose again, and I acknowledge my incredible privilege in having this choice, I would still prefer to use these things on airline tickets and fancy French cheeses.

Because I think there is something else that holds me back.

Citizenship is an odd thing. At birth, it’s given freely, often times by the country in which you’re lucky (or unlucky) enough to be born. Unfathomable to many Americans, some countries even allow the parents to choose their child’s citizenship. As you get older, however, the window closes. You are forced to accept your citizenship like you’re forced to accept your eye color or the size of your nose. It’s an intangible, yet no less defining characteristic that shapes who you are as a person and how you view the world.

But at the same time, it’s just a word on a birth certificate. A concept made up by people as a means of self-definition. A cultural construct that holds no real value outside of the citizenship-defined society we have created for ourselves. At our core, we are no different than someone on the other side of the world. We’re all just human beings in the end.

Funny how we tend to forget this so easily.

And thus we draw borders. We fight wars. We promise to build walls. Situations become “us” versus “them” rather than “all of us” versus “those who are trying to do us harm.” We forget the idea of shared humanity and cling instead to our identity as citizens of this place or that.

My Filipino citizenship is a document. A legality. A formalized reflection of where I was born. But it’s also my last connection to a country that is quickly fading in my memories. I hesitate to say it, but trading in one citizenship for another feels like letting go of a part of me, even though the culture, rather than the citizenship status itself, makes me who I am.

Funny how a simple identifier can signify nothing inherent, nothing regarding the true nature of the identified. And yet, the same identifier is collapsed with the culture it represents. It is imbued with so much meaning by the identified in order to self-describe to a world that only understands national allegiance—national culture even—via citizenship.

Maybe this is the year I convince myself of the lesson I’ve been trying to teach others all along—that citizenship says nothing about who someone is at their essence.

Maybe this is the year I realize that I don’t have to compromise my identity as a Filipino immigrant to become a civically empowered member of American society.

Maybe this is the year I fill out my citizenship application. Because as much fun as it has been planning my exit-from-America strategy if Mr. President decides to kick all of us brown-skinned immigrants out, I’d rather not leave it up to chance the next time around.