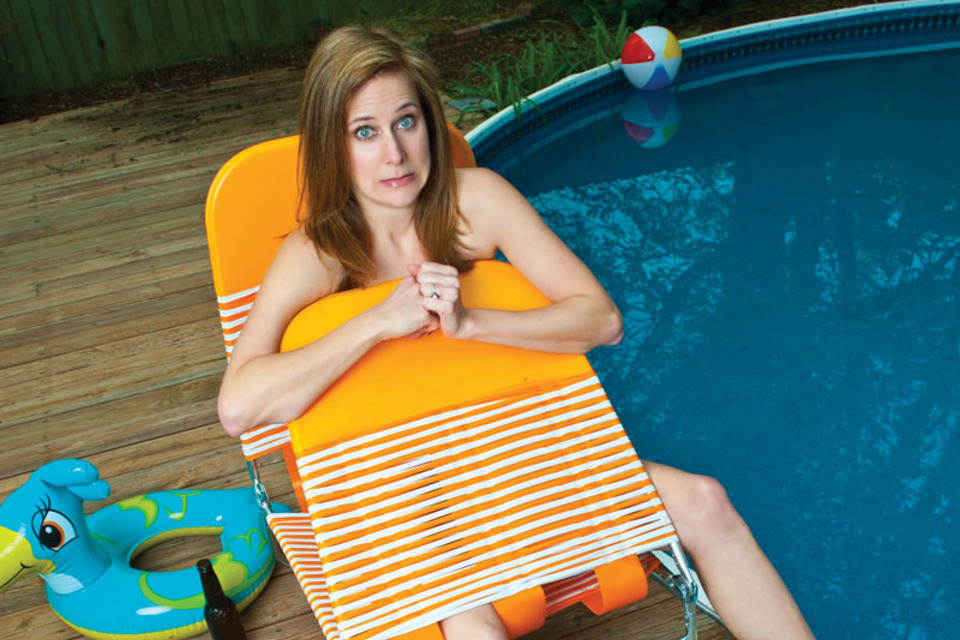 As a small-town-raised, Greek-life-affiliated southern transplant living in the big city, I could certainly relate to Jane Borden’s laugh-out-loud memoir, I Totally Meant to Do That, which her website describes as the musings of “a Cerberus, a griffin or one of those joints near Port Authority that’s both a Pizza Hut and a Taco Bell…a hybrid too horrifying to exist: a hipster-debutante.” From paying too much money for too little apartment to milking sorority connections in the urban jungle, the book hit a little too close to home—in the best way possible. I’ve gotten to know Jane over the past few years, and, if you can believe it, she’s even funnier IRL (her Twitter account comes as a close second though). As weird as it is to interview a friend, I wanted to feature her since a) she’s been writing these delightful TV recaps as of late; b) it was a good way to catch up since we live on opposite coasts now; and c) I really look up to her and wanted to do a piece on a woman in my life that inspires me. And now that I’ve embarrassed myself with this outpouring of sentiment, I’m going to shut up and let the interview do the talking.

How did you get your start in comedy? It happened by accident. A friend took me to an improv show at the Upright Citizens Brigade Theatre in New York, just for fun. I signed up for classes that night. I fell for improv hard. It completely changed my life, and I never considered following a different road. That being said, the road has taken many turns, eventually leading to writing and standup. But I still love improv more than anything: a good show, creating that with other people, is electric, uncontainable, and totally addictive.

Your memoir, I Totally Meant to Do That, got some great press from heavy-hitters in the comedy world like Amy Poehler and Ed Helms. What led you to write the book? I was an editor at a magazine, but was not doing any creative prose, until a friend of mine asked me to participate a new project, a live written-works performance night. It was called Writers Working. The audience scribbled comments and feedback, which the producers mailed to the guests a couple of days later. It was very low-fi, a lot of fun, and helpful to. I did a few of those, and suddenly found myself with several workable essays and also an aptitude for it. So I started pitching and selling pieces to magazines. And then I received a book in the mail from my aunt—a guide to contemporary etiquette. It was a not-so-subtle suggestion that I’d lost my southern manners since moving to New York. The book was hilarious—totally inapplicable to life in New York—and I felt compelled to write an open letter arguing against the tenets offered and also against my aunt’s concerns. That ended up opening a can of worms and becoming the focal point for a memoir about the experience of being a Southerner in New York, and, more generally, the search for home.

What projects are you working on now? I’m currently putting together a proposal for a second book, which someone will hopefully want to publish. It’s still in the beginning phase—I’ve discovered that you have to live a lot of life before you can write about it. Meanwhile, I’m freelancing as a journalist, and now that I live in Los Angeles, I’m dabbling in the TV world, which I find to be glamorous and completely inscrutable. We’ll see. And of course, doing standup whenever I can—the thrill of live performance is an indulgence I can’t seem to kick. Also, stand-up is the best. It’s the Wild West of free speech, for better and for worse, which, of course, is how free speech works, I guess.

What is your favorite venue to perform stand-up? Anywhere that people want to listen. That sounds like a copout, but it’s true. It’s impossible to predict which shows will be good or fun, and in which you’ll bomb. Its ephemerality is part of the thrill. I performed for a crowd of 600, which is great for the ego. But one of my favorite shows was a crowd of only 15, during a crazy snowstorm in New York; we were all in it together.

Are you dying to collaborate with anyone? If so, who would it be and why? My husband and I just came up with a great idea that we’re hoping to make ourselves as a web series. He is not a comedian, but is very funny, which means I steal all of his jokes—so this would be an opportunity for him to get some credit.