Whose Bass Is It Anyway? (Or, The Problem with Pop’s Empowerment Anthems) 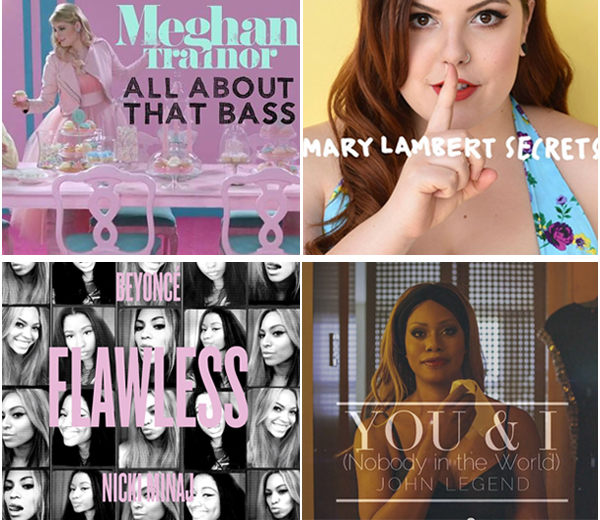 This article was originally written as a producer piece for Things Not Seen.

This summer, a wave of up-beat, supposedly empowering pop songs came out. A similar outpouring of self-esteem boosting anthems happened in 2011, with Lady Gaga’s “Born this Way,” Katy Perry’s “Fireworks,” and Pink’s “Perfect.” The music industry has apparently discovered that inspiring confidence is profitable, but like anything that is created to be sold, the message of these songs is often corrupted.

When I first saw the music video for Meghan Trainor’s debut single “All About that Bass,” I really wanted to like it. It’s a catchy song, reminiscent of doo-wop. The music video is cute and retro, all pastel colors and synchronized dance moves. But the song is still really problematic. There’s a line in the chorus, “’Cause every inch of you is perfect from the bottom to the top,” that encompasses what a truly empowering song should say: complete self-acceptance.

I wish this was the ultimate message of the song.

However, Trainor’s explanation for self-love isn’t entirely altruistic. She sings, “Yeah, my mama she told me don’t worry about your size / She says boys like a little more booty to hold at night.”

By placating a woman’s appearance with a man’s affection, she is reinforcing the patriarchal idea that women’s bodies exist only for men’s enjoyment. Trainor isn’t espousing body acceptance because it’s a healthy mindset, but rather, her thesis seems to become “If you’re a little chubby—that’s alright, boys will still like you.”

Trainor describes herself, saying “All the right junk in all the right places,” but that description remains problematic. She is implicitly saying her body shape is the right one, and others are therefore wrong. This is similar to the “real women have curves,” craze—it is no one’s place to determine what makes anyone else’s body “real” or acceptable. By referring to herself as “junk,” she is self-objectifying, reflecting a culture that doesn’t respect women or their bodies.

Now, I may only have an eleventh-grade understanding of music theory, but I’m pretty sure Meghan Trainor is not a bass. This isn’t a deep analysis of her lyrics, but it’s still important. No matter how many times she tries to assert that she’s “not about” treble—I think she’s stuck with it.

For an equally retro-cute but less problematic empowerment anthem, Mary Lambert’s “Secrets” reflects a healthy view of self-acceptance. Lambert addresses a range of issues including weight, but also, mental health, sexuality, and a whole range of what could be referred to as flaws. She lists them, and then asks the critical question—“So what?” By opening up about all her supposed flaws, she regains power over her them and accepts herself. Then, she encourages her listeners to embrace what they don’t like about themselves, saying “They tell us from the time we’re young / To hide the things that we don’t like about ourselves / Inside ourselves / I know I’m not the only one who spent so long attempting to be someone else / Well I’m over it.”  She offers complete self-acceptance as an alternative to a culture full of shame. Her confidence becomes contagious.

But just like “She Keeps Me Warm,” it’ll probably take another straight white dude to sample Mary Lambert’s amazing work so the masses will finally listen what she has to say. I’m hoping that won’t be the case, because she is phenomenal by herself. Here’s looking at you, Macklemore.

John Legend’s song “You and I” gained notoriety when actress and activist Laverne Cox appeared in the music video. Personally, I was equally excited to see comedian Tig Notaro with Cox, because they’ve been topping my list of awesome ladies recently. The song however, reinforced some dangerous patriarchal ideas, especially the notion of male gaze—the objectification of women. Because the song comes from Legend’s male perspective, the problematic lyrics are not surprising, but they remain disappointing. He croons, “You fix your make up, just so / Guess you don’t know, that you’re beautiful / Try on every dress that you own / You were fine in my eyes a half hour ago.”

His approval of the woman in question previously suggest that she no longer needs to primp, he already considered her adequately attractive. It’s his job to tell her she is beautiful, because apparently, she is unaware. Her physical appearance exists only for his pleasure, any self-worth she derives is secondary to men’s opinion.

The objectification continues into the second verse as Legend sings, “You stop the room when we walk in / Spotlight’s on everybody’s staring / Tell all of these boys they’re wasting their time / Stop standing in line, ‘cause you’re all mine.”

These lyrics imply that the female subject of Legend’s song is a status symbol other men are competing over. He is essentially asserting that he has already won the “prize” of the woman, stripping her of her agency and further objectifying her.

Conversely, Beyoncé basically broke the internet in 2013 when surprised the world with her self-titled album that featured a plethora of opinionated songs. She continued to shock her fan base by releasing a remix of the song “***Flawless,” featuring the rapper Nicki Minaj in August of 2014. Both the original and remix of the song offer a better option of self-confidence.

In both the original and the remix, Beyoncé sings “Momma taught me good home training / My Daddy taught me how to love my haters / My sister taught me I should speak my mind / My man made me feel so God damn fine (I’m flawless!)”

Compared with Meghan Trainor’s maternal voice emphasizing male gaze, Beyoncé offers a holistic view, with all member of her immediate family giving her important advice to build self-confidence. Male gaze plays a role through her husband, Jay-Z, but it is immediately echoed with the independent statement “I’m flawless.” Unlike John Legend’s objectification, Beyoncé acknowledges the self-worth she gains from her appearance, but it is only part of her self-esteem, and declares she is flawless in all areas. Moreover, she encourages this mindset in her listeners, singing, “I woke up like this, I woke up like this / We flawless, ladies tell ‘em / Say ‘I look so good tonight.’” She invites her listeners to join her in total acceptance and confidence. Furthermore, in the original version of the song, Beyoncé samples Nigerian writer, Chimamanda Ngozi Adichie’s TED talk entitled “We should all be feminists.” By including Adichie, the song gains authority as a feminist assertion, rising above the profitable “feel good” songs like those by Legend and Trainor. Beyoncé solidifies her stance with the addition of Adichie’s voice.

The remix, featuring Nicki Minaj, is far more explicit than the original. In it, Beyoncé addresses the infamous elevator fight between her sister, Solange, and her husband. She sings, “Of course sometime shit goes down when there’s a billion dollars on an elevator.” By confronting the public feud, and then literally laughing it off, she takes control of her life, instead of letting gossip-mongers control it. As her first collaboration with Nicki Minaj, the pair represent some of the most powerful women currently recording music. In Minaj’s verse, she asserts herself both sexually and financially, addressing her detractors by singing, “I know they hope I fall / But tell ‘em winning is my motherfuckin’ protocol.” Minaj refers to both herself and Beyoncé as “queens,” further cementing their role as leaders in what will hopefully become a healthier view of women in pop music.

“***Flawless” and “Secrets” are paradigms of self-empowerment music because they offer self-acceptance as unconditional. Unlike “All about That Bass” and “You and I,” the confidence originates internally, without the need for validation from others, especially men. If pop music continues to push feel good confidence boosting anthems (as it most likely will, because teenage girls seem to be the only ones who actually pay for music these days), pop music should embrace actual self-confidence. Though healthy messages and profitable messages are rarely one in the same, I sincerely hope Lambert and Beyoncé’s confidence will be used as paradigms. This means songs with real acceptance, without external validation—not songs saying “boys like a little more booty to hold at night.”