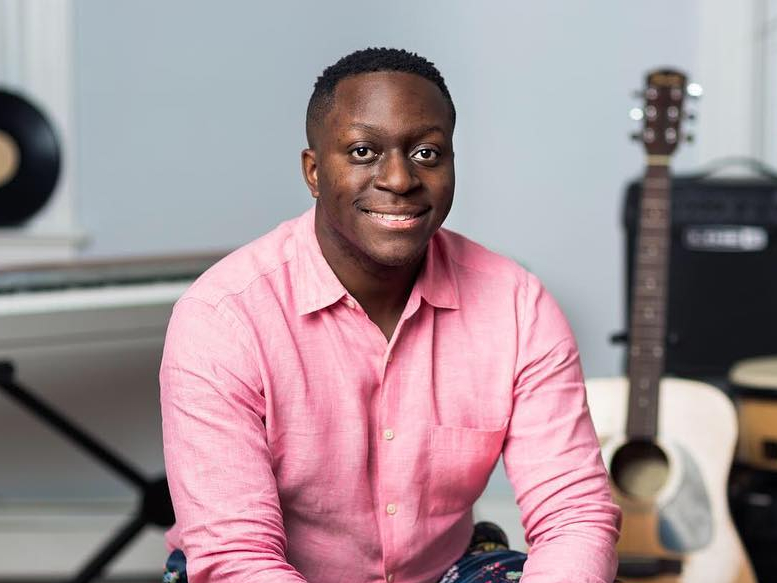 When I sat down to write this introduction, it took me an embarrassingly long time to remember the when, where, and how I met my friend Akpanoluo U Etteh II, or Ak for short. I’ve spent time with the 31-year-old data engineer and music salon founder in a myriad of different situations: a fashion week soirée in Soho, lunch at an upscale bistro on Abbot Kinney Boulevard in Venice, even a get-together at my sorority house in rural Tennessee, just to name a few. Because of this, I sometimes forget the humble, and somewhat ordinary, origins of our friendship—a casual meeting at a house party hosted by his then-roommate and my college friend at their Brooklyn apartment one sweltering summer evening back in 2012.

Ak still lives in the Williamsburg neighborhood, only a few blocks away from where we first met. We’ve kept in touch as I’ve moved further and further away from the L train—first to areas south of the Gowanus Canal, then a few thousand miles west to Los Angeles, where I currently reside. Ak continues to be one of the most brilliant and fascinating people I know, equally versed in data logistics as he is in choral a capella arrangements, gastronomic delights, or nuanced perspectives on hot-button political topics. Read on for more about how this millennial cleverly navigates two seemingly disparate career paths—and gets to do a shit ton of really cool things along the way.

Could you describe your job? I’m the Director of Data Products at Accordant Media.

Did you go to college, and if so, what is your degree in? I have a bachelor of science in psychology on the behavioral neuroscience track from Yale.

What is your favorite part of your job? The company I work with [Accordant Media] focuses on programmatic advertising. Programmatic advertising is the automated placement of ads online. When the field of internet advertising began, ads were sold in bulk for specific sites (i.e. 1,000 ads to the New York Times in August for $5), but sophisticated exchanges from Google, Facebook, AppNexus, and others allow ads to be targeted more specifically (i.e. no more than three ads in a single week to a user X, who has visited www.ford.com, at $0.005 a pop when they visit a list of sites we’ve approved to place ads on).

The insane quantity of data at my disposal to analyze is my favorite part of the job. We have data on every ad we place: to which domains, to whom we served those ads (via a de-identified cookie ID), and how much we paid for each individual ad; every page users visit on our brands’ websites; and a sample of the entire programmatic marketplace—a view of which sites are offering up spots on their pages for ads to be placed.

These three major data sources combined create a powerful tool that we use to target ads with more precision, avoid giving users too many ads for the same brand—which is annoying!—and inform clients on how well their ads are performing. I help to build and improve products that allow us to do this, which always presents new, intricate challenges.

What is the weirdest task you’ve ever had to do for your job? Because there are so many interlocking systems to make everything run, and because we provide clients with such precise detail on their ads, discrepancies can sometimes be a bitch to figure out. I recently worked on tweaking one of our analytical models to include custom data for a client, which messed up the entire model. I spent three months going into a rabbit hole of data to resolve multiple issues and come up with a single, elegant solution.

Do you have a side gig? I founded and run a music salon and community called The Soundshop. I first hosted the salon in January 2017 when I invited ten musicians to my apartment to share and discuss their work with each other. I came up with the idea after facilitating introductions between my friends in the music industry and my brother Eno while in Los Angeles. It unites my passions for music, networking, and conversation into an event that has helped musicians forge connections and support one another in their creative endeavors.

The salon has grown into a monthly event boasting between 40 and 60 attendees. Each salon has a new theme: music and poetry, music and theater, music and romance, a celebration of black musicians, music and healing, to name a few. The salons, which kicked off in apartments, now take place at interesting locations around Brooklyn and Manhattan such as Poets House, Dungeon Beach sound studio, The City Reliquary Museum, The Williamsburg Hotel, and Crossing Collective art gallery in Chelsea. I curate between 4 and 6 artists for each event, who have 10 minutes to share a song and talk about it as it relates to the theme, and then 5 minutes for questions and conversation with the audience.

What was your first real job? Working as a brand strategist for The Yale Marketing and Licensing Department. I conceptualized, wrote, and designed Yale’s first brand identity guide for their licensed merchandise—a tool to help promote the use of The Yale Brand in licensed products (shirts, ties, mugs, Moleskines, etc.) and to quickly give licensees a sense of Yale’s history, its brand, its mission, and how the brand ought to be used, so that they can adequately incorporate it into their products. My boss, Stephanie Schwartz, was a former executive in the NBA, has a great depth of connections and insight, and has served as my mentor to the present day.

Got any hot tips for folks wanting to do what you do? To get into a job doing data, it’s about learning how to use SQL. It’s not an incredibly hard language to learn, but it improves your value in the marketplace tremendously. And once you get a job that allows you to work in SQL every day, you can start picking up a scripting language to make your work more efficient.

To host a salon of any variety: be willing to start small, and host regular events. This way, you build an expectation that each month people know to look out for your event. Additionally, this allows you to experiment and iterate very quickly on the format and hone in on what works.

And, to get into the music industry, as I have slowly been getting deeper into—or any industry you don’t have experience in—just be willing to put yourself out there. Your goal should be front and center when people ask you what you do, even if you’re just getting started. I mention my music salon within the first few sentences of meeting someone, even on a chance encounter, and it has really opened doors.