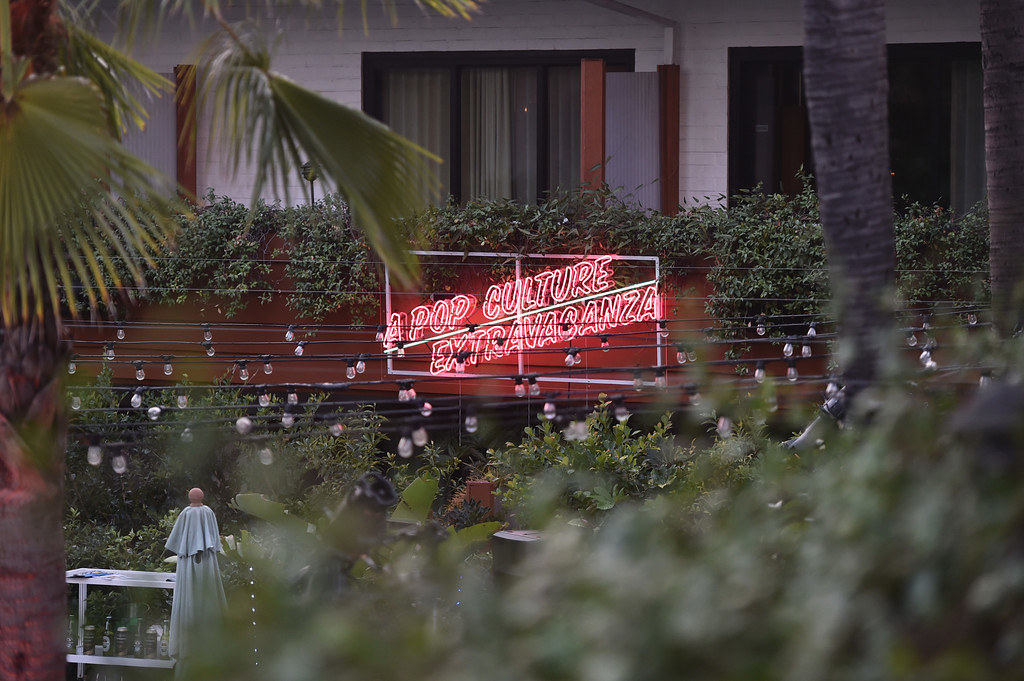 For pop culture junkies, it’s easy to go way too hard at the Vulture Festival knowing that you could be getting the inside scoop on Syfy’s Deadly Class one moment and touring Grand Central Market with Phil Rosenthal and Nancy Silverton the next. We learned our lesson from last year and paced ourselves accordingly on Sunday, focusing on a handful of the festival’s returning “signature” events. Read on for some of our favorite moments from Day Two. 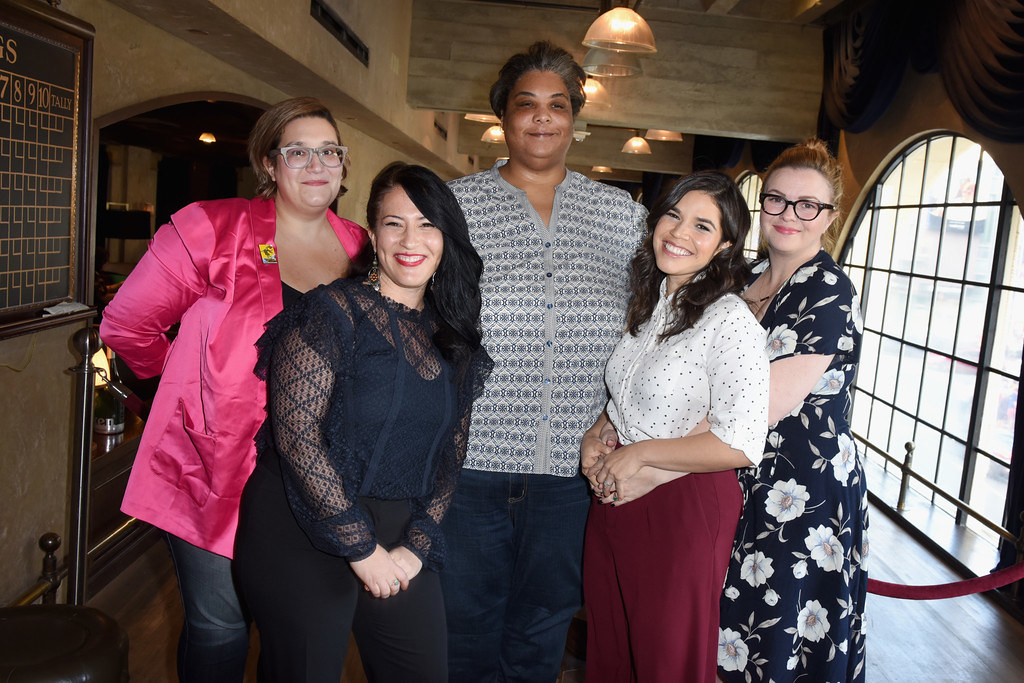 There’s nothing like a good walkout jam, and co-hosts Amber Tamblyn and Roxane Gay nailed it with a throwback to M.I.A.’s “Bad Girls” as they took the stage alongside guests America Ferrera, Ada Limón and Carmen Maria Machado for their Feminist AF reading series. Gay began by reminding the audience that just last week, 110 women were elected to the United States Congress. This transitioned nicely into a reading of “Be a Good Boy,” from the collection Forty-Four Stories about Our Forty-Four Presidents; the flash fiction piece centers around an intimate moment between John F. Kennedy and his wife Jackie in their White House bedroom as John considers how the building does not feel like home.

Poet Ada Limón captivated the audience with “How to Triumph Like a Girl,” a visceral evocation of female strength through the image of an “8-pound female horse heart.” Though the poem was written several decades ago, it was recently published in her collection Bright Dead Things and won a 2015 Pushcart Prize. Carmen Maria Machado followed with her self-described “hit single,” “The Husband Stitch,” from Her Body and Other Parties. The story—whose title refers to an extra stitch given during the repair process after a vaginal birth, supposedly to tighten the vagina for increased pleasure of a male sexual partner—plays on the schoolyard tale of the girl who wears a mysterious green ribbon around her neck.

Pants-sharing BFFs America Ferrera and Amber Tamblyn closed out the reading series, each sharing intimate, emotional essays. Ferrera read an excerpt from her personal contribution to an anthology she recently edited, called American Like Me: Reflections on Life Between Cultures; the essay discusses a trip to Honduras when Ferrera encountered her estranged father’s grave by happenstance. Tamblyn followed by taking us back to Election Night 2016—a night she spent at the Javits Center in Manhattan amongst fellow Hillary Clinton supporters, watching “Katy Perry anxiously chew[ing] on a celery stick.” Tamblyn’s essay, from her upcoming collection Era of Ignition, follows her journey through carrying a pregnancy to term post-election and her worry about keeping her daughter safe in this world. She ended her reading by playing a recording of her daughter’s heartbeat, eliciting heavy sighs and a smattering of sniffles from the audience. 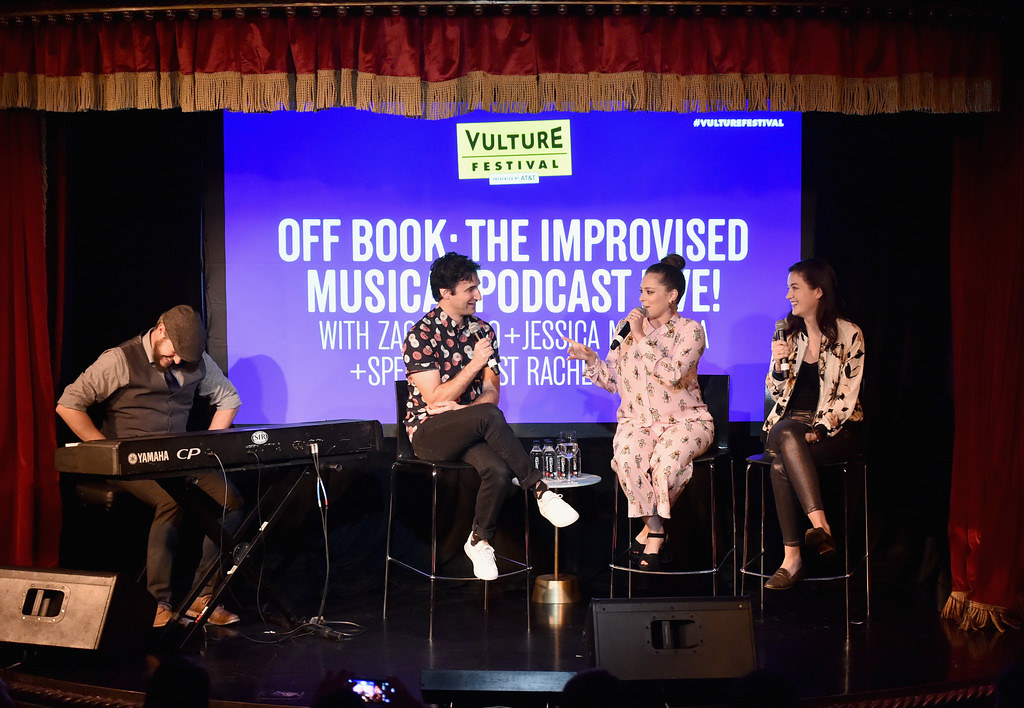 At this point, our Vulture Festival experience wouldn’t be complete without an absurd musical number from Rachel Bloom. Thanks to Jessica McKenna and Zach Reino of Off Book—an improvised musical podcast, just like the tagline says—a lucky handful of folks got to experience just that, in an oddly fitting velveted lounge in the basement of The Hollywood Roosevelt.

McKenna and Reino are forces of improv nature, spinning a hilarious melodic tale about Disneyland’s Tower of Terror ride right before our very ears. There was fantasy! There was drama! There was a song about STDs! At one point, they even sang a number about being forces of literal nature with McKenna’s “Lightning” and Reino’s “Thunder” shepherding special guest Bloom along in her role as “Hurricane.” I can definitively say that I’ve never seen or heard anything like it. And, as McKenna and Reino told the audience, it’s impossible to experience that exact musical ever again.