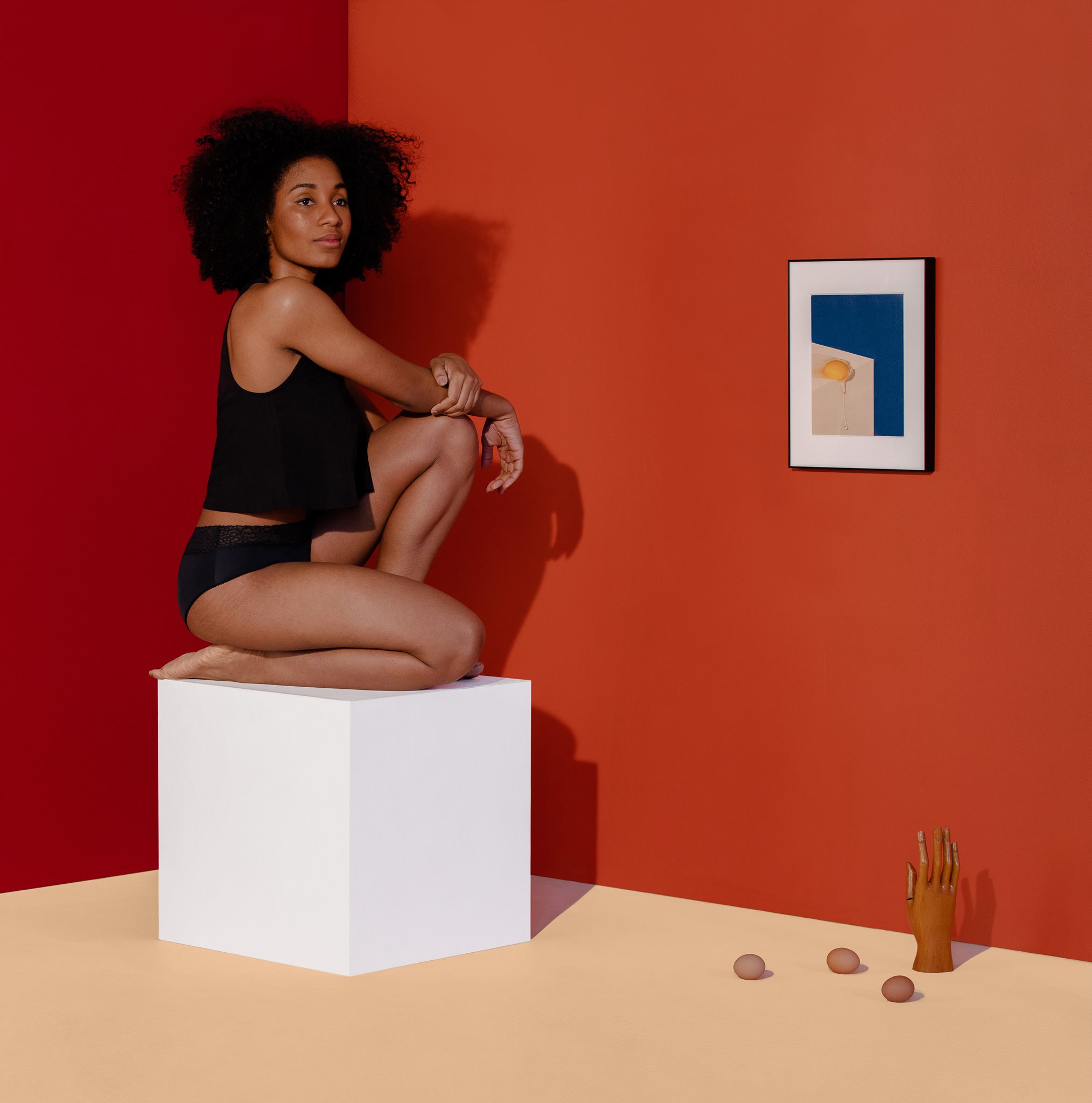 Our multi-part feature on periods continues with a review of Thinx panties. You’ve heard the news. You’ve seen the ads. You’ve considered recommendations from your sister/cousin/best friend/neighbor/favorite actress. But are they worth the hype (and the $30+ price tag)? Thinx was kind enough to send over a few pairs for the Dinner Party crew to try out. Below, hear from DP contributor Abi Aragon and editor-in-chief Pamela Guerra about their experiences with these so-called “revolutionary” undies.

Abi Aragon: Thankfully, my flow is pretty predictable. I’ve been on Nuvaring for years now (which I would also highly recommend!) and it keeps my flow very regular. I normally have a four-day long period that starts out medium/heavy for the first two days. The next two days are normally pretty light. I will say that my version of “heavy” may be different from other ladies—I don’t usually have problems with clumping or bleeding through things.

Pamela Guerra: A trickle for the first day and Niagara Falls for the next four to five, only slowing down to a “medium” on day six or so. I’m on a low-hormone version of the pill, which makes it easy to figure out what day I’m starting, but once it’s here, IT’S HERE.

What do you usually use during that time of the month?

Abi: Because I’m on Nuvaring (which stays inside of you for three weeks of the month, thus its amazing convenience), I like to avoid using tampons when I’m on my period. I’ve been using Always Infinity pads since they first came out and I’ve always been amazed at how thin and absorbent they are. They were a major breakthrough for me in terms of comfort, dryness, and absorption.

Pamela: I usually do tampons during the day and, like Abi, Always Infinity pads at night. I’m a busy lady though, and between working two jobs and being a full-time graduate student (and running this site!), it’s pretty easy for me to forget to change my tampon. I’ve had a few accidents with bleeding through here and there, but my real worry is getting TSS. I suppose wearing a pad during the day would solve this problem, but I really hate the feeling of something being stuck to my underwear.

Which Thinx styles did you try?

Abi: I tried the Hiphugger (for heavy days) and the Cheeky (for light days) styles.

Pamela: I tried the Hiphugger and the Sport (for medium days).

How often did you have to change undies?  What sorts of difficulties did you encounter?

Abi: I wore the Hiphugger pair all day and night my first day (although I started much later in the day than normal) and changed underwear when I woke up on day two. I had no problems with bleeding through or feeling uncomfortable. Because I’m still very heavy on my second day, I only risked wearing the Cheeky pair for a few hours before changing back to my regular set up while waiting for the Hiphugger pair to dry after I washed them. I encountered difficulty on day two, when my flow was still moderately heavy, waiting for my Hiphugger pair to dry. I settled for the Cheeky for a few hours, but switched back to pads after a few hours. Other than that, the only thing I thought was strange was not being able to see evidence of my flow in Thinx. Even in the tan pairs, the inside lining is black, so it makes it hard to distinguish how heavy or light you are or how close you may be to bleeding through them.

Pamela: I wore the Hiphugger pair for a full day and into the night during my second day. The next day, I switched to the Sport pair and wore that for a full work day as I waited for the Hiphugger pair to dry. Both times, I was absolutely surprised that I didn’t even leak a little bit. One would imagine that such heavy-duty stuff might feel like a diaper or something, but they didn’t. It was a bit like wearing snug bikini bottoms—sans that saggy, wet butt feeling after they absorb water. At some point though, I messed up my Thinx panty rotation. In addition to running around literally from sunrise to sunset, I’m also a bit absent-minded. I put a pair in the tub to wash but got distracted and forgot to actually wash it until I realized it was time to change. Thus, I ended up with two wet pairs waiting to dry, and I had to resort to wearing a pad all evening.

Were two pairs sufficient? How many pairs do you think you would need?

Abi: Two pairs could’ve been sufficient for me if I had tried two “heavy days” pairs. My first day wearing the Hiphugger, I was amazed that I didn’t bleed straight through the underwear! But on my second day, I only had the Cheeky style left. I wore those for a few hours before I started to feel uncomfortable and changed back into my usual set up. If I had started with two heavy days pairs, I could’ve washed one and let it dry while I wore the other one. Honestly, I was so impressed with the performance of the Hiphugger pair that I went ahead and purchased two more pairs of Thinx to complete my set. So that makes two Hiphugger pairs, one Sporty pair, and one Cheeky pair.

Pamela: I definitely needed at least one more pair of the Hiphugger style for backup. Days three through five for me are crazy heavy, and another Hiphugger (or two) would have helped out. That being said, this is mostly on me for messing up the washing rotation. If you’re forgetful and have a lot on your plate as I do, I recommend getting a full set of five to six, depending on your flow.

Realistically, what are the odds of you relying solely on Thinx for your entire period week?

Abi: Obviously, I won’t throw out my tampons for backup, but I do plan on relying solely on Thinx from now on. This is gonna change the lives of women around the world! I’ve never been more comfortable. I was really worried about the cleaning process, but it was super easy. When I took them off, I rinsed them thoroughly (and was surprised to see that nothing really washed out of them, so it wasn’t disgusting), and then I put them on a cold cycle wash in the washing machine. The hardest part was just waiting on them to air dry.

Pamela: Yes, yes, absolutely yes, but only when I get enough pairs. I stayed clean and dry the whole time I had them on, which is an absolute blessing when you’re out and about from 6:30 a.m. to 8:30 p.m. I hand-washed the pairs when I got home, which wasn’t too difficult of a process—if I remembered to do it, that is. In Cali, the pairs take about six to eight hours to dry completely, so I imagine it might take a full twelve hours in more humid parts of the country. I’m sure I’ll keep a box or two of pads and tampons in the cabinet for emergencies, but for the most part, I think I’ll be relying on Thinx from now on.

Abi: My final verdict is that these things are incredible. I’m gonna spread the word to all my lady friends to invest in a set of these. It’s kind of amazing how comfortable and lightweight they are. I know some women have a thing against using pads (and obviously I’m not one of them), but Thinx technology helped me feel extremely dry (that wicking power though!). I think it’s a step up from pads for sure. Also, I love that I’m not going to be regularly buying and throwing away pads and tampons—the fact that this is reusable and doesn’t contribute to waste makes me happy.

Pamela: These panties are a miracle made just for women. I really hate the waste that pads and tampons create, but I’ve always been intimidated by menstrual cups. Thinx panties are a great way to address this issue. The pairs are convenient, user-friendly, and in my experience, 100% leak-proof. When Thinx calls their products “revolutionary,” they aren’t kidding.