Homelands, Handmaids, and HerStories at the 2017 LA Times Festival of Books 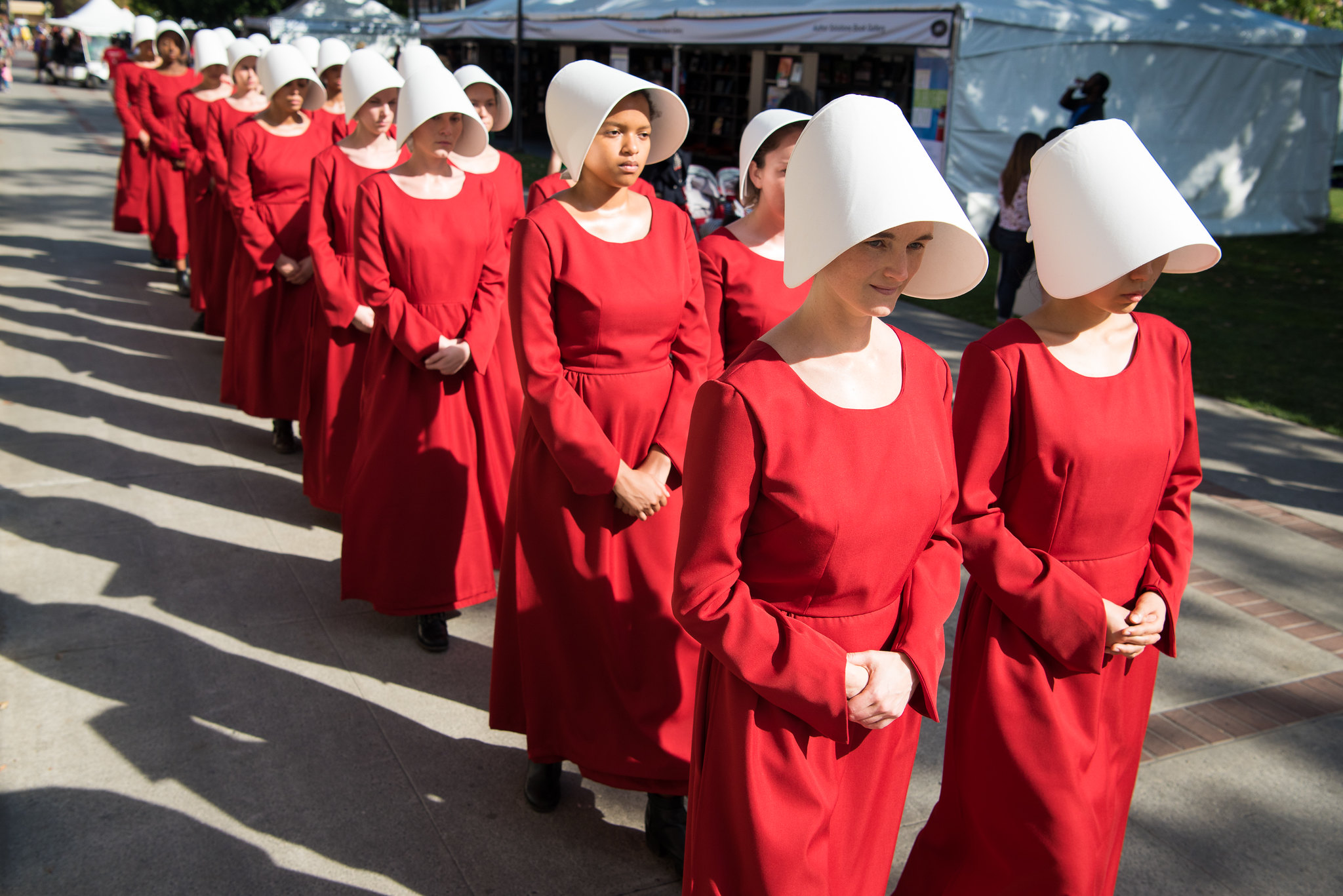 With a captivating lineup, on-point panel topics, and several hundred book lovers willing to brave the rain, last year’s Festival of Books was certainly hard to beat. Though arguably, this year’s iteration may have been even better—and the sunny weather was only the beginning. The two-day event featured a similar format to years past, but some literary all-stars, including Margaret Atwood, Roxane Gay, George Saunders, and Chuck Palahniuk, added some heft to the 2017 offerings. Panels this year discussed a whole slew of topics, ranging from the evolution of feminism, the role of memory in globalized migrations, and, as expected, discussion on who some authors have deemed “he who must not be named.” The DP crew had to make some tough choices regarding who to see, but in the end, we felt pretty great about our selections.

The Future is Female

Rebecca Solnit (Men Explain Things to Me, A Field Guide to Getting Lost), Lindy West (Shrill: Notes from a Loud Woman), and Betty Fussell (My Kitchen Wars, The Story of Corn), moderated by Joy Press (LA Times)

Solnit addressed the most recent presidential election very early into the conversation and pointed out that the word “crisis” in old-school medicine refers to a sudden change in the course of an illness that could become terminal but could also mean that something is on the road to recovery. She observed, “There is a level of engagement that has extraordinary possibilities right now,” noting that “fifty percent of young people in this country are not white, and they are not gonna be nice to conservatives and the alt-right.”

West said that she had to make “corrections” to the paperback edition of her new book, Shrill: Notes from a Loud Woman, since “you can’t just present this book [a feminist memoir] without contextualizing it ‘post-incident.’” The author added a new introduction right after the election, creating a sort of “time capsule” for that moment in history. Further, she noted that it would be a “misreading to say that the election defeated the feminist movement.” However, she, as a white woman, is likewise cautious about being too positive since she likely will not experience the same oppressions exacerbated by the election that target women of color.

West and Fussell also discussed how it took them a while to come to terms with identifying as a “feminist.” West said she did not call herself a feminist “until she was 21, 22.” It took Fussell even longer, for the bra-burning, man-rejecting stance of radical feminists in the ‘50s “didn’t fit” with her personal experiences. Nonetheless, she now sees that feminism today is “fluid, the future…is way beyond our old categories.”

Saunders spoke primarily of his debut novel, Lincoln in the Bardo, a “kind of scary and kind of funny” work that draws from both the Tibetan tradition of the bardo, a purgatorial concept of sorts, as well as fictionalized portrayals of figures from American history. The author conducted a fair amount of research for the novel, stating that he needed the “historical stuff…to ground things the crazier the supernatural got.” However, he admitted that the factual components of his novel represent his understanding of the subjects rather than any sort of expertise.

“My thing on fiction, the main trick is to keep the car out of the ditch,” Saunders stated. That is, the author has to develop an internal sense of whether the reader is still paying attention or not. “If you’re writing and you encounter a problem, it’s the best thing that could happen…you need to stop over-managing, and let the book speak for itself,” he said.

Nguyen and Lalami appeared to be a natural fit for a panel: both are foreign-born writers who come from academic backgrounds, and themes from these experiences frequently take center stage in their work. Not to mention, Lalami’s 2014 novel, The Moor’s Account, was nominated for a Pulitzer Prize in Fiction, which Nguyen’s The Sympathizer would go on to win in 2016. The pair discussed how folks often asked them about “master texts” from the literary canon—Graham Greene’s The Quiet American for Nguyen and Paul Bowles’s novels for Lalami—and the fact that they both sought to examine these works closer to discover the true stories of their proxies, the subaltern who are only spoken for by the colonizer. Lalami said that one must take great care to examine descriptions critically and “to read between the lines of the accounts” in order to discover truths about the colonized. Nguyen talked further about the fact that speaking for someone “is a dangerous act…an act of appropriation” that one could easily get wrong, something that even he faces when writing about experiences that are not his own.

Nguyen and Lalami also talked about the role of the past in stories of displacement and war, noting that refugees and immigrants alike have to deal with a “country that you know is frozen” in memory. Moreover, the authors agreed that the role of the past takes on an even more complex dimension for refugees since they did not choose to leave their countries voluntarily. Nguyen observed that Vietnamese refugees are frequently “plagued by memory” and often end up “looking backwards more than forwards”; this notion comes up literally in the form of a ghost in Nguyen’s “Black-Eyed Women” from his short story collection The Refugees. Lalami extended the discussion by summarizing a piece she wrote for The New Yorker about taking her citizenship oath at a place that once served as a holding center for Japanese-Americans in WWII before being transported to internment camps. In the piece, she ties the idea to the travel ban targeting Muslims, observing that folks tend to have short memories and make the same mistakes over and over.

The Handmaid’s Tale from Page to Screen

If it wasn’t apparent from her inclusion in this panel, Atwood enthusiastically endorsed the TV adaptation of her bestselling novel, stating that television in particular “enables…for adaptations that aren’t squashed into a short period of time” since the audience has “time to follow characters” with the “slow development of emotions and crises.” The trio onstage acknowledged that the production values for TV are incredibly high nowadays compared to years past, which allowed for Miller and his team to create beautiful cinematic moments within a terrifying—yet visually stunning—universe, where the moments of horror are even more pronounced.

Miller also discussed the show’s two deviations from the book: casting the Commander and Serena Joy as younger and creating a multiracial cast in general. Of the former, Miller said that he wanted to increase the desire, sexual tension, and jealousy between the couple and Offred, complicating their tangled relationship even further. As for the multiracial cast, Miller believes that it would not have made sense to do otherwise since the show is based in the present day. Additionally, he mentioned that Samira Wiley played a major role in the decision. The actress, who plays Moira, gave such an excellent audition that it spurred Miller to rethink the demographics of the show’s universe. “I think it’s correct thinking,” he stated.

And how was it proposing these changes to the author of such an iconic work of literature? “I didn’t go to the bathroom all weekend,” Miller joked.