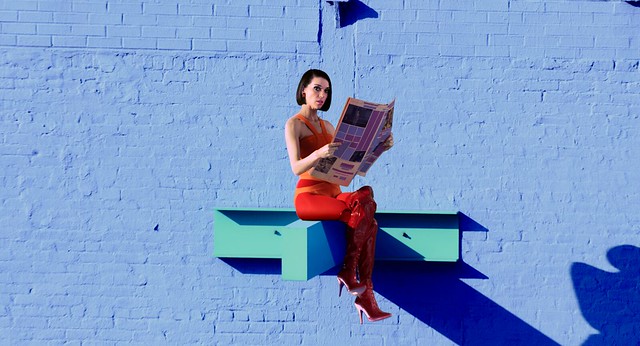 Surrealism meets 2017 high fashion in the new music video for “New York,” the latest single from St. Vincent (a.k.a. Annie Clark). The song, a melancholy piano ballad released back in June, marked a sharp turn for the guitar goddess, whose eponymous 2014 album featured distorted, angular guitar riffs that put her on the map—not to mention the electrifying guitar solos from her live performances during this period. Similarly, the video for “New York” showcases a whole new side of Clark. Trading in her shock of powder purple curls from the St. Vincent-era for a sleek black bob, Clark stands in stark contrast to bright, color-blocked backdrops of a reimagined, cartoonish New York City.

It’s not the first time Clark has undergone such a dramatic transformation of appearance. When she first came on my radar via La Blogothèque’s Take Away Shows back in 2007, she looked like someone from a vintage movie, with her soft, doe eyes and wild, dark hair. Maybe it has something to do with the company she’s been keeping lately, ‘cause St. Vincent circa 2017 looks fresh out of the latest Vogue editorial—and I am definitely here for it.

The video was directed by Alex Da Corte, an up-and-coming Philadelphia-based visual artist whose most recent collaboration featured original sculptures by Da Corte alongside a collection of objects from Andy Warhol’s personal estate. Da Corte said in a statement that “Annie’s New York is the New York of my dreams—one that is blurry and fractured, dreamy and flat. It is the Toontown to my Hollywood. It is beautiful but slightly out of reach.” For New Yorkers, the video offers an added bonus of clever references to NYC landmarks, such as Clark sitting on one of the ledges of “The Gateway to Soho,” an art installation I used to walk past on my daily commute. The video is a mesmerizing piece of work—made even more notable by the fact that Clark and Da Corte manage to breathe new life into a subject that’s been covered a mind-numbing number of times in practically every medium imaginable.