I was listening to a radio interview with Death Cab for Cutie frontman Ben Gibbard the other day about the rapid changes he’s observed in Seattle’s Capitol Hill neighborhood, his home for the past twenty years. Gibbard noted that his sadness over the morphing urban landscape isn’t directly due to buildings being demolished or shops closing down. Rather, he feels that his memories are connected to physical places and grieves as these familiar haunts—and with them, his memories—begin to disappear.

I couldn’t help but think of Gibbard’s analogy about “plugging your hard drive into physical places” when I first heard of “That’s From Disneyland!” a super-sized exhibit of Disneyland memorabilia owned by music agent Richard Kraft. When Kraft’s brother Dave passed away, he rediscovered their shared childhood moments at The Happiest Place on Earth. Rather than contenting himself with a set of mouse ears or a snow globe of Cinderella’s castle, Kraft began to collect vintage souvenirs and rare artifacts from Disney Parks, eventually amassing more than 750 items over the next two decades.

Kraft’s collection is currently on display in—drumroll, please—an abandoned Sports Authority in the San Fernando Valley. Much like a fairy godmother, famed auction house Van Eaton Galleries has turned the space into a 20,000 square foot pop-up exhibit, where guests are invited to get up close and personal with items such as a once-submerged giant sea serpent from “The Submarine Voyage” ride, José the animatronic Enchanted Tiki Room bird, and all four Original Haunted Mansion Stretching Room paintings. An intimate theater space, dubbed “Club Kraftland,” is located directly above the makeshift gallery and hosts a handful of special ticketed events throughout the remainder of the exhibit’s run.

Personally, I do very much enjoy Disneyland, but to an extent—as in, my once-a-year gratis trip courtesy of a friend who does fancy lighting stuff down at Disney World in Florida. That said, I’m always curious about people who are into Disney. Even more so, I’m absolutely fascinated by the kind of Disney-a-holic who would drive all the way to an abandoned sporting goods store in Sherman Oaks and stand in line to see a bunch of old stuff that used to be in a theme park.

After hanging out with some super fans at last Saturday’s Club Kraftland event, however, I began to understand a bit more about Disney fandom, nay, obsession. The notion of memory being inextricably tied to a place—and said place being The Happiest Place on Earth—seemed to be true for almost all of the folks I encountered at the event, “Hanging Out With Paul Scheer: Disney Edition,” including Scheer’s guests: Jeff Garlin (The Goldbergs, Toy Story 3, and Wall-E), Ben Schwartz (Parks & Rec, Ducktales), Rachel Bloom (Crazy Ex-Girlfriend, Robot Chicken), and Allie Goertz (musician and editor at Mad magazine). 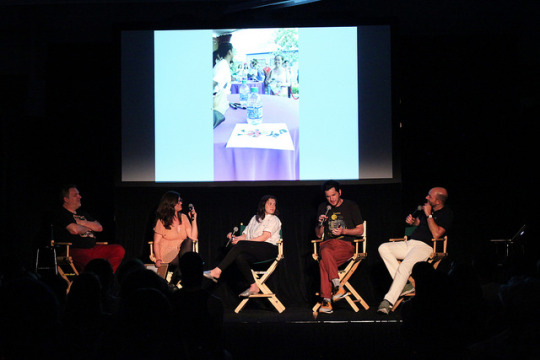 The event, a Disney-centric version of Scheer’s monthly Largo show, seemed much like a two-hour, adults-only version of show-and-tell. Bloom, a native of Manhattan Beach, brought her parents Shelli and Alan, who became even more devoted to Disneyland long after they could use their daughter as an excuse to go to the park. Meanwhile, Garlin told a cringe-worthy story about the connection between his eldest son’s circumcision and a suspicious foil envelope thrown into the moat surrounding Sleeping Beauty’s castle (you do the math).

Club Kraftland is set to host two more events: “Maltin on Movies” with film critic Leonard Maltin and his daughter Jessie in conversation with Disney legend Floyd Norman, tonight, August 22nd; and “A Whole New World of Alan Menken,” a charity concert featuring legendary Disney composer Alan Menken, on Friday, August 24th. Additionally, “That’s From Disneyland!” will culminate in a two-day auction of the entire collection over the weekend, since, as Richard puts it, he’s ready to “let it go.”

“That’s From Disneyland!” runs through August 24th and is open from noon to 8 p.m. Entrance to the exhibit is free. The two-day auction will be held on Saturday, August 25th and Sunday, August 26th. A portion of the proceeds from the auction will go to the Coffin-Siris Foundation and CHIME Institute, two organizations that work with children with developmental disorders. For more information about location, tickets to Club Kraftland events, and the auction, please visit their website.