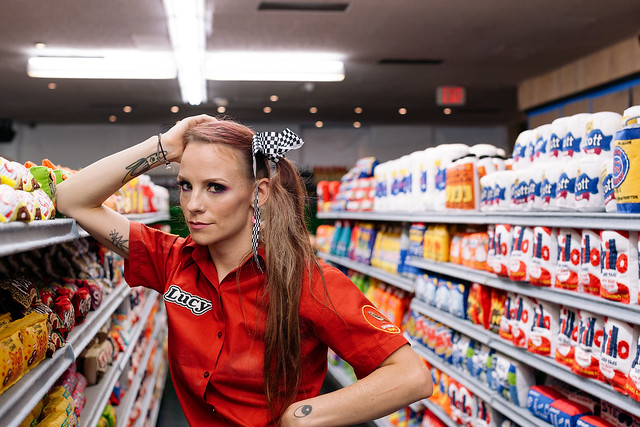 I first caught wind of British artist Lucy Sparrow a little over a year ago, in an email from a colleague fangirling over 8 Till Late, Sparrow’s felted Manhattan bodega at The Standard, High Line. Yes, you read that right: Sparrow stocked an entire store, cat and everything, with felted versions of everyday bodega items.

Thankfully, as seems to be the fate of most buzzed-about New York hits nowadays, Sparrow’s creations have finally landed in Los Angeles. Sparrow Mart is four times bigger than its east coast counterpart and features over 31,000 felted pieces, from California rolls at a sushi counter to a selection of hot sauces—Tapatío included.

On her West Coast debut, Sparrow comments: “As a child, I was obsessed with the exotic, turbo-charged technicolour glow emanating from across the Atlantic. The source of this neon rainbow was Los Angeles—a seemingly mythical place to a child growing up in grey, post-recession Britain—and one that has hugely influenced my artistic practice. Thanks to the amazing team at The Standard, Downtown, the felt is finally coming home to the city of endless possibilities and colour.”

According to Standard Culture, 8 Till Late “was supposed to run the entire month [in June 2017], but it had to close a week early because we couldn’t stop her products from flying off the shelves.” Judging from the queues forming every weekend outside the Los Angeles edition, don’t expect Sparrow Mart to last long either.

Lucy Sparrow’s Sparrow Mart runs from August 1st through 31st (or while the felt lasts!) at The Standard, Downtown Los Angeles. The exhibit is open Tuesdays through Sundays from 11 a.m. to 9 p.m.