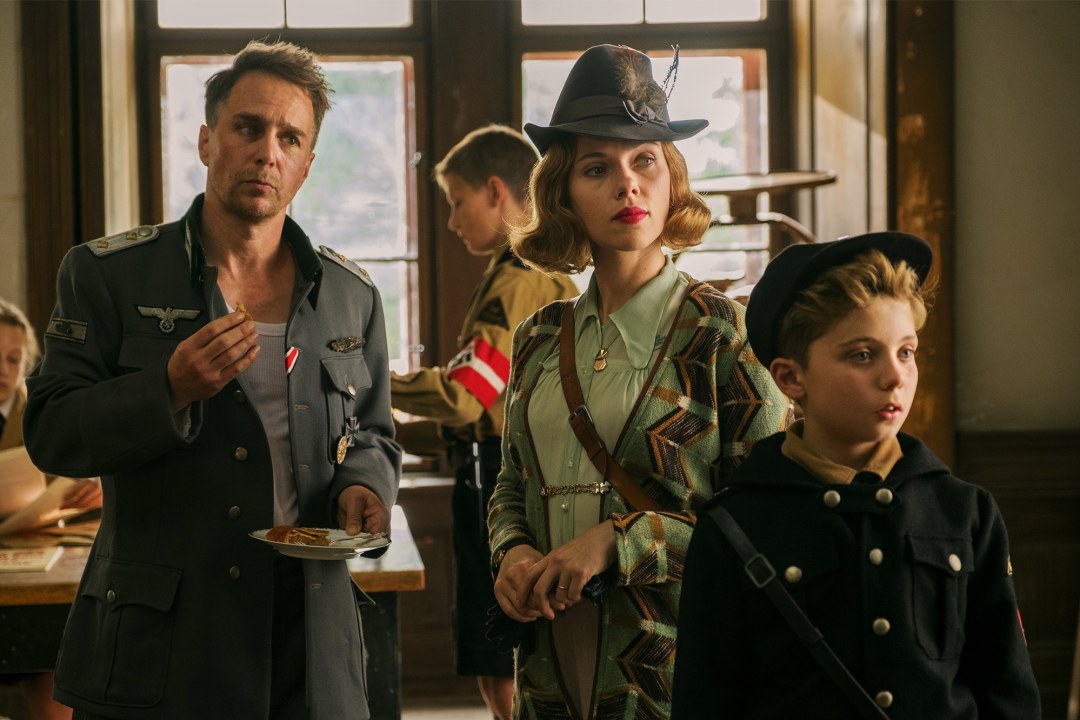 What It’s Like to Watch Every 2020 Oscar-Nominated Film, Volume Four

To wrap up the final volume of this year’s Oscars roundup, I’m going to breeze through a few expected—and thus a tad uninspired—nominees for Best Picture; in their own ways, both 1917 and Ford v Ferrari told stories that were familiar and match what the Academy tends to reward. I’ll also cover the three shorts categories, as these films sometimes signal what is to come for the Academy—and considering Taika Waititi was previously nominated for the 2004 short film Two Cars, One Night, it’s entirely within the realm of possibility for future winners to be amongst the ranks in these lesser-known categories.

As much as I would love Parasite to win in every category it is nominated in—especially Best Picture—it seems most likely that the award will go to 1917. Many have described the film as having a video game-like feel with long, continuous shots that could belong in a first-person shooter like Call of Duty. I personally found that the technique elevated the story by reiterating the difficulty of the mission from the perspective of the two soldiers at the center of the story, but at no point did I feel as immersed as I would have in a video game. That said, the artistry behind the camerawork breathes new life into this relatively straightforward war narrative. And while the film is nominated for almost all of the major categories, the other nomination I would bet on for a win is in the Best Original Score category. From the first minute of the movie until the end of the credits, the entire score felt forceful and stirring, but familiar in a way that heightened all of the right emotions at exactly the right time.

A well-made movie for middle-aged dads, Ford v Ferrari felt all-too-familiar—probably because you’ve seen this recycled plot before. Oscar voters love a historical film about men who defy the odds in search of their own certain brand of glory. While this film was beautifully shot, there’s little else to write home about. It’s hard to pinpoint any one thing this movie gets wrong, but for the most part, it did this little-known sports story a huge disservice by making it feel somehow known already.

To be perfectly honest, I feel the most conflicted about this film and its many nominations. I very much respect Taika Waititi’s work, but I do not think this film in particular is worthy of all the acclaim it has received. I have a major problem with the fact that the Elsa, a teenage Jewish girl, is only deemed worthy of saving by the protagonist, Jojo, after he develops a crush on her. It’s 2020 people—and we’re all tired of stories that link a woman’s worth to male attention and attraction. Jojo Rabbit also received nods in the Best Adapted Screenplay, Best Supporting Actress, Best Production Design, and Best Film Editing categories, but the category I’d like to see it win is Best Costume Design for the film’s fresh take on 1940s World War II ensembles.

Before I saw this film, I read that the narrative resembled a play and would translate well to the stage; while I think the latter may be true, the film format to me seemed necessary to keep the plot from getting too stuffy. The flashbacks and multiple locations worked wonders in making these two men’s lives feel real—relatable even—and I was pleasantly surprised by how funny this film is. Both Anthony Hopkins and Jonathan Pryce shine as the titular characters, and their performances, in my opinion, deserve wins in the Best Actor and Best Supporting Actor categories. I’m a little perplexed as to why this film wasn’t nominated for Best Picture, considering a snooze fest like Ford v Ferrari nabbed a nomination instead.

I found it a little surprising that this film was only nominated in one category considering how much the Academy loves Clint Eastwood, but for some reason, this film just didn’t resonate well this year. And though Kathy Bates delivered a superb performance for her role as the mother of Richard Jewell, a man falsely accused of the Centennial Olympic Park bombing at the 1996 Summer Olympics, it’s unlikely that she’ll deliver an upset to current Best Supporting Actress frontrunner Laura Dern. Overall, Richard Jewell is an intense, moving film with rock-solid contributions from Bates and her co-stars Paul Walter Hauser and Sam Rockwell, but perhaps with the persistent turmoil in the current news cycle, this biographical drama was just too much for today’s audiences.

Though it has its dark moments, Corpus Christi is a delightful Polish film about a paroled young man who is determined to become a priest despite his criminal background. This Best International Feature nominee ends rather abruptly, leaving audiences shocked and a bit confused, but as a whole, I highly recommend this film—given that you can stomach a bit of graphic violence.

Another solid nominee in the Best Documentary Feature category, I found The Cave to be thematically similar to For Sama in terms of exploring the experiences of war as a woman. The film tells the story of Amani Ballour, a Syrian doctor who treats besieged civilians in a subterranean makeshift hospital. Even as a skilled pediatrician, Dr. Ballour and her colleagues still face an oppressively patriarchal society where men do not respect, much less appreciate, women who seek to become more than just wives and mothers. It’s a worthy contender in an evenly stacked category, and definitely one I recommend watching.

Typically, when I watch all of the Oscar-nominated shorts, the animated films as a whole tend to bring me the most joy and laughter. This was not the case this year, and I sobbed through almost all of the nominated shorts. Hair Love received considerable attention during its popular Kickstarter run, and the Jordan Peele-produced project is a clear frontrunner of the pack. Another short worthy of note is the heart-wrenching Kitbull, which was created by Pixar’s in-house animation lab. My personal pick for the category is Memorable, a claymation project done in the same aesthetic as a Vincent van Gogh painting. The main character in the short suffers from Alzheimer’s disease, and as his memory evades him, so do the paint strokes that make up his world. Sister and Dcera (Daughter), the two other nominees, both offer touching family portraits with unique visual sensibilities.

While I enjoyed all of the nominees this year for Best Documentary Short Subject, most of these probably would have worked better as TV episodes, or even as a limited-run series due to length and subject matter. The two standouts in the category are In the Absence and Walk Run Cha-Cha. I could not believe I had not previously heard of the 2014 South Korean ferry disaster covered by In the Absence, a tragedy that claimed more than 300 lives. Drawn-out shots of the ferry slowly tilting as boats and helicopters documented the event—without stepping in to help—emphasize just how grossly mishandled the horrific event was. On a somewhat lighter note, Walk Run Cha-Cha uses the language of dance to tell a story about how a middle-aged couple, separated for several years by the Vietnam War, attempts to make up for lost time, finding pathways to joy despite the suffering brought on by circumstances outside of their control.

If I’m being perfectly honest, this was not a strong year for the Best Live Action Short Film category, but there were a few gems amongst the relatively lackluster bunch. A Sister takes on a familiar framing with a conversation between two people, but switches things up in this thriller by featuring a phone call between a victim and an emergency services operator. Saria might have worked better in a documentary setting, but the heartbreaking story about a fire that broke out during protests against a government-run orphanage makes this one worth seeing. The Neighbors’ Window, my personal favorite, comes from Marshall Curry, who directed the Academy Award-nominated short documentary A Night at the Garden; the film gives a modern-day spin to Hitchcock’s classic Rear Window, resulting in a tale that is equal parts hilarious and devastating.