Beneath the White Tent Once Again: Dinner Party Does Frieze LA

The other day, I had a conversation with a friend who works in the medical field about the inaccessibility of contemporary art to the general public. “I just don’t get, well, why this is a thing,” she scoffed while telling me about an acquaintance who creates minimalist light sculptures. Frankly, I ask myself this same question every time I’m at a gallery opening or art fair. And this is coming from someone who loves contemporary art.

I think this has always been a valid question, but it feels more salient now than ever considering the current political and social turmoil that permeates our day-to-day. Why do we bother with esoteric installations and lofty conceptual pieces when they feel so divorced from everyday life that they’re almost offensive in some respects? Conversely, when an artist shines a light on the darker corners of society and puts them on display—a piece like Chris Burden’s L.A.P.D. Uniforms (1994) comes to mind—audiences often times have a similar reaction. Again, why bother when you see the same thing on the nightly news?

The tension between the world at large and their subjective, aesthetic representations followed me like a shadow as I perused the showcases at this year’s iteration of Frieze Los Angeles, the West Coast counterpart of the renowned contemporary art fair from the folks at frieze magazine. Compared to the flamboyance of last year’s inaugural edition, the pieces this year felt much more restrained, subtle even.

The backlot installations were intriguing without being over-the-top—think one eyebrow raised instead of two. Highlights included Sayre Gomez’s Palm Tree Cell Tower (2020), a commentary on the intersection of urban planning and Hollywood stagecraft, and Hommes, Homes, Homes (2020) by Gabriella Sanchez, an intellectual puzzle utilizing careful, layered symbolism and clever wordplay over charged imagery to explore masculinity, Chicanx and barrio culture, and gentrification. 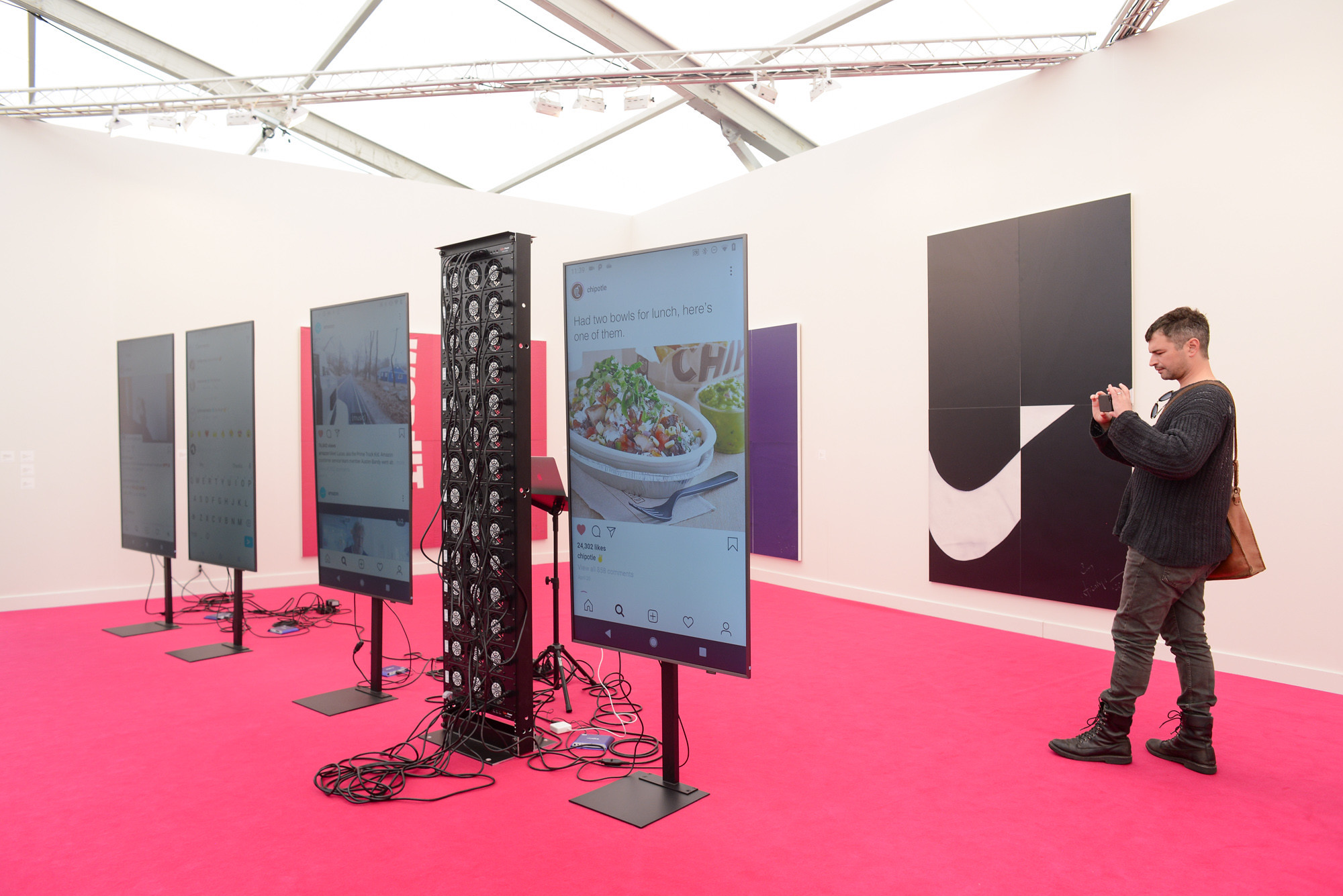 The galleries inside were no different, offering bite-sized versions of well-known names in the art world—Warhol! Murakami! Koons! all clocking in at just under five feet, the perfect additions to any mansion’s marble-floored foyer! (Just kidding. Kind of…) Even the more substantial installations had consumer culture in mind, such as Cory Arcangel’s pieces at Greene Naftali, featuring jumbo screens that played recordings of live bot performances on Instagram.

Galerie Eva Presenhuber presented a miniaturized rendition of Ugo Rondinone’s Seven Magic Mountains, dubbed ten mountains + one sun (2019). Compared to its massive land art cousin out in the Nevada desert, ten mountains + one sun features pieces so small and delicate that they roped off the exhibit when the fair opened to the public, presumably for fear of someone toppling over the carefully stacked stone sculptures. 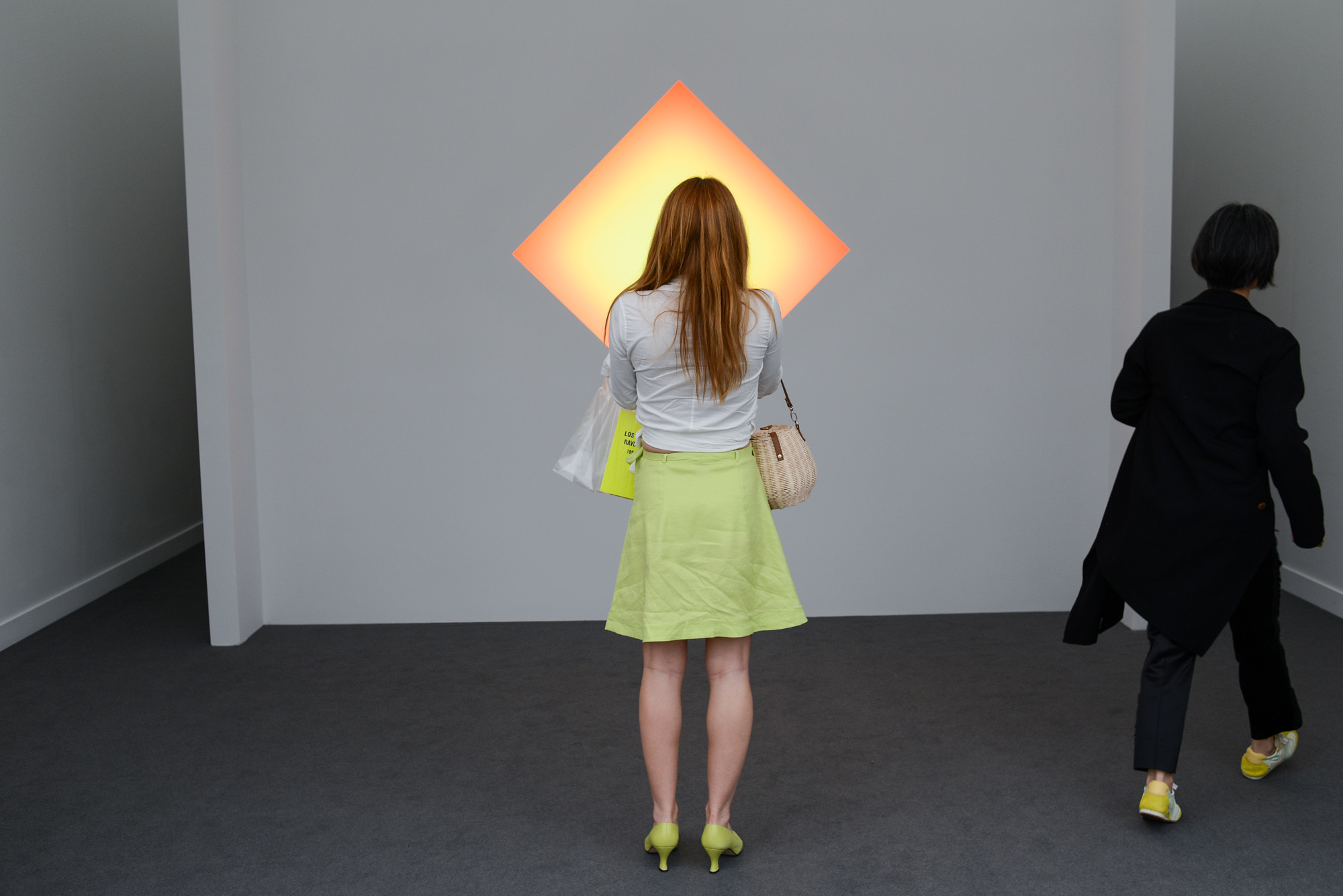 Arguably, this year’s pièce de résistance, an immersive solo exhibition of archival works by James Turrell, likewise felt diminutive in scale compared to his better-known Skyspaces or even site-specific installations such as Aten Reign (2013) and Celestial Vault (1996). Presented as a combined effort by Pace Gallery and Kayne Griffin Corcoran, the works on display from Turrell’s long-running Glass series could be described as “Turrell lite,” his awe-inspiring explorations on perceptual psychology condensed into an easily digestible, commodifiable format; it should be noted that this exhibition in particular was meant to “further the ongoing crowdsourcing and awareness-raising efforts for Turrell’s magnum opus, the Roden Crater project.”

Which brings us back to that initial question: If you’re neither a collector looking to purchase nor an art fanatic wanting to nerd out on technique or symbolism used in aesthetic representations of contemporary society, what’s the point? I think one of the fair’s most unique projects, Fuck White Supremacy, Let’s Get Free (2019) by Patrisse Cullors—artist and co-founder of Black Lives Matter—provides an answer to this lingering question. Cullors created the piece, a participatory silent disco to the Electric Slide in the Paramount Studios backlot, as a reaction to seeing children detained at the border.

In a video for Frieze Fairs, she explains: “…I was angry and I was upset and I really wanted to make sure that I got my friends together and my family together and that we danced. And there is nothing like unifying people around a single thing, and I wanted to unify people around dancing.” Fuck White Supremacy is a bold, sprawling work, allowing Cullors to figuratively and literally take up space usually reserved for white, male, heterosexual representation and explore catharsis and collective restoration through an artistic, symbolic medium.

While there are limits to just how effective a work such as Fuck White Supremacy can be in a setting like Frieze—ticket prices started at $25 for the backlot alone (more than $10 above the minimum wage in the city), and the attendees’ demographics reflect this—the piece exists as a response to trauma, an attempt to process and heal from the atrocities in the world that command our attention day in and day out. These works don’t exist in isolation either, and as long as the patrons and the gatekeepers of the art world continue to be white and wealthy, the tension between art and its relevance to today’s society will always remain. Representation does matter, even in a niche bubble such as contemporary art, and the works that should command our attention are the ones that strive to make sense of our world, not just through an Anglocentric, cisgendered, patriarchal lens, but in a true universal sense that accounts for the experiences of marginalized communities worldwide.