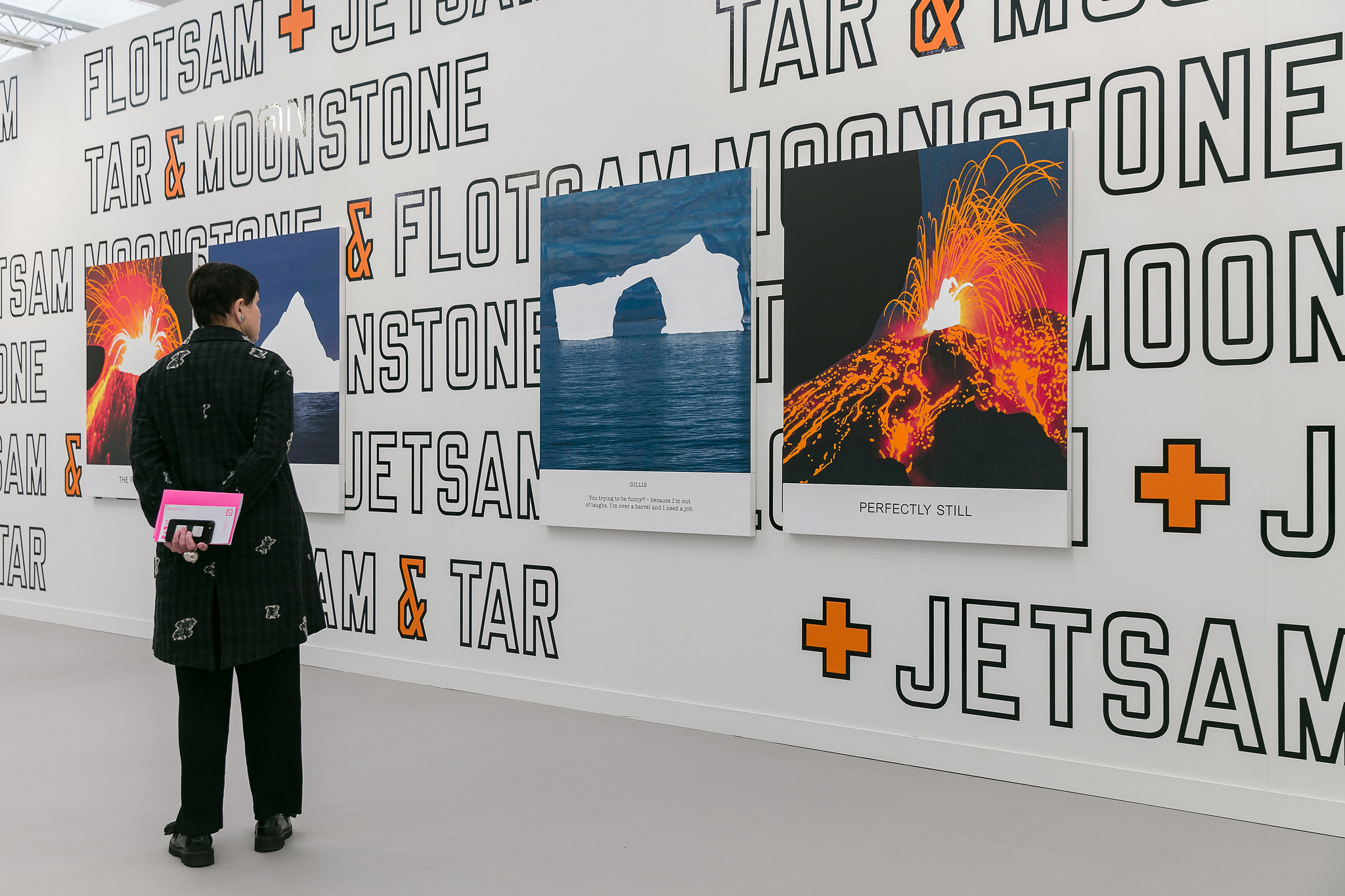 Articles on commercial art fairs almost always start with some variation of, “It’s easy to hate on [insert art fair here],” and Frieze is no exception. To a large degree, this statement rings true—and not just because an art critic is attempting to make some lofty, highbrow commentary about the debasement of visual art through commodification.

There is a palpable sort of icky-ness that comes with spending a few hours under a giant white tent oozing with wealth and excess and tailored denim. It’s unsettling to hear someone casually mention “$40 (thousand) for this one over here,” and “the larger one is closer to six (figures).” Unlike with museums, your $50 admission ticket isn’t going towards ensuring that future audiences can enjoy the same artwork that you just did. And what’s more—people often come for the scene, not the art; Christopher Knight at the Los Angeles Times rightly points out, “Frieze emphasizes commerce in an inhospitable context for people whose highest priority is social—a party, preferably with paparazzi in attendance.”

I get it. These pretentious, glossy playgrounds that cater to the 1% are kind of gross. But still—there’s always a “but”—events like Frieze have a certain sort of irresistible allure because they offer a pathway to connect with art that ultimately feels very different from how we orient ourselves around pieces in a museum, or even in commercial galleries during an art walk. The utter chaos that comes with cramming millionaire art collectors, celebrity-obsessed selfie-takers, dealers charging their phones at any available electrical outlet, and gallery staff who are just trying to eat their lunch, all under one crowded tent energizes the experience in such a way that the art feels more accessible, more alive even. And I’m not just talking about a guy I saw who waltzed face-first into an Alexander Calder mobile during the Frieze Los Angeles press and VIP preview yesterday.

All this to say, my inner art nerd had a smashing time at the West Coast debut of the fair, my second go-around at a Frieze event. Haters gonna hate, but even the critics have to admit that the art at this weekend’s fair is pretty good, making Frieze a must-see despite the weather’s unexpected outburst. (I wonder why it always seems to rain during Frieze weekends?) As expected, there was a smattering of big names—a Cindy Sherman self-portrait at Sprüth Magers, a Barbara Kruger installation scattered across the pavement of Paramount’s New York City backlot, a single Nefertiti bust from Isa Genzken at David Zwirner, even a collection of Damien Hirst’s formaldehyde-preserved creatures in the White Cube booth.

But some of the most striking pieces on display were from artists who don’t have the same sort of instant name or even visual recognition for folks outside the art world. Unisex Love Nest (1999), by the late Mike Kelley, had its very first showing in the artist’s hometown; the installation, a piece-by-piece recreation of a real magazine spread about a young girl’s bedroom, is both unsettling and awe-inspiring in its meticulousness. The same sort of obsessive, goosebumps-inducing detail could be found, albeit to a lesser degree, in Mark A. Rodriguez’s collection of Grateful Dead cassette recordings in the Park View/Paul Soto booth, a Los Angeles-based gallery.

Sharing the White Cube booth with Hirst is Brazilian artist Jac Leirner, whose Little Light (2017) strikes a chord in its simplicity, with miles of copper wire leading to a single light bulb. Similarly Do Ho Suh’s Specimen Series (2018), tucked away in the back corner of the tent at Lehmann Maupin, revels in the beauty of the everyday. The artist’s polyester fabric sculptures trace the outlines of locks, light switches, and smoke detectors of homes in London, New York, Seoul, Berlin, and Providence; the addresses where each originated are carefully written out in pencil at the bottom of every frame. 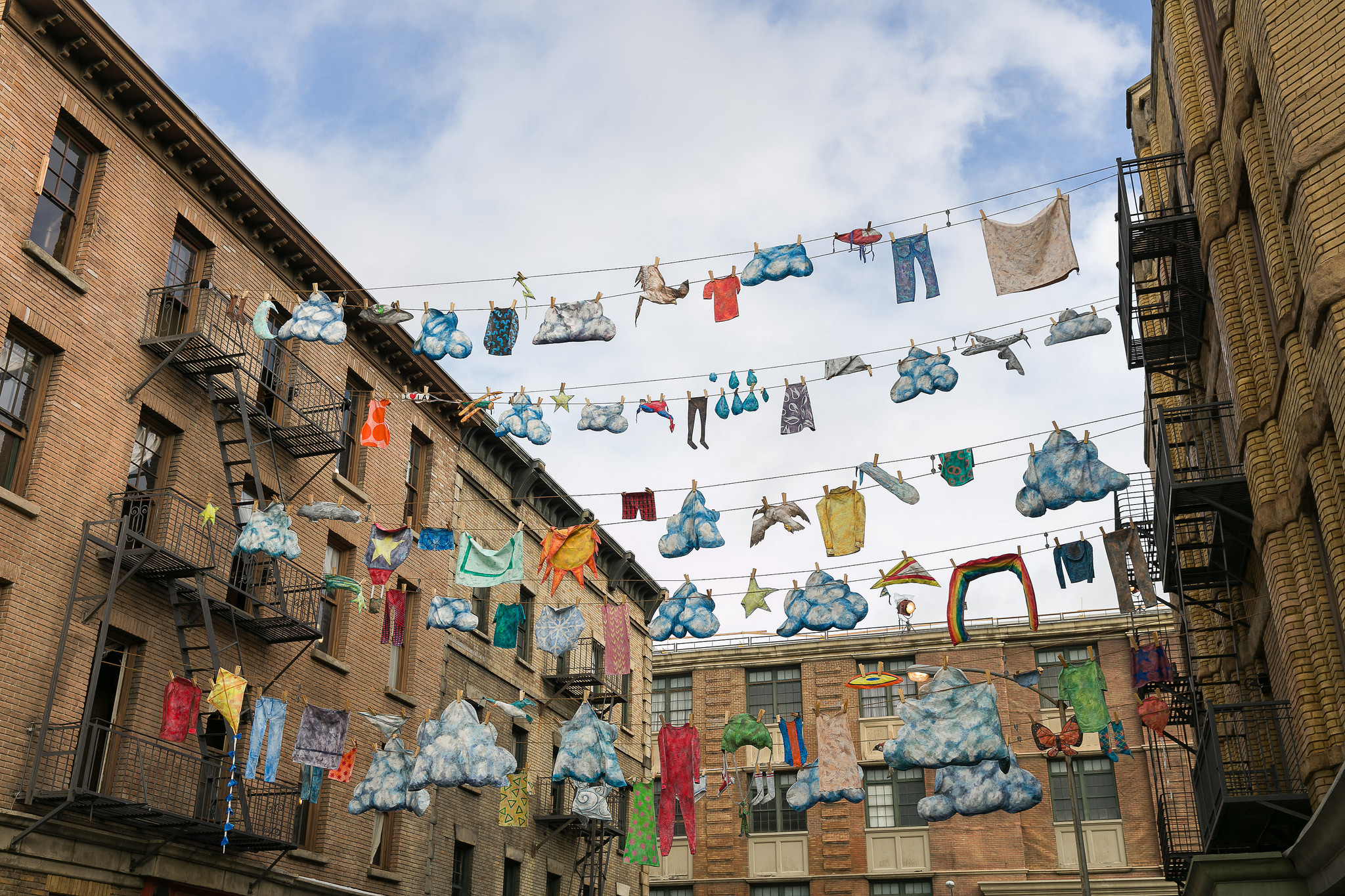 Arguably, the pièce de résistance of Frieze Los Angeles isn’t even under the white tent at all. Rather, the most recent iteration of the fair featured an extensive backlot setup where the aforementioned Kruger installation is joined by a number of works commissioned by Frieze Projects, as well as a few other grandiose pieces. Hannah Greely’s High and Dry (2019)—as in, that piece you’ve been seeing all over your Instagram feed this weekend—is an impressive, cartoonish recreation of an idealized urban domestic scene, stringing several crowded clotheslines across fire escapes high above the street. The puddles that continue to form from the weekend rain add a delightful, unexpected twist to the piece, with Greely’s paintings reflected in shining, sharp detail in the water. Just a few steps away is Trulee Hall’s Infestation (2019), again a storybook-like image, though Hall’s creation, with its fluorescent green tentacles weaving in and out of apartment windows, is rooted in a much darker fantasy. And, of course, Paul McCarthy’s Daddies Tomato Ketchup Inflatable (2007) appears inescapable, looming large over the backlot like an angry red bell tower, or perhaps the inanimate, though no less sinister, cousin of the Marshmallow Man from Ghostbusters.

Frieze Los Angeles runs through Sunday, February 17th at Paramount Studios in Hollywood. Unfortunately, admission tickets are sold out, so you’ll either have to try your luck on Craigslist, or content yourself with searching for #friezeartfair on social media until dates are announced for next year.