Brooklyn Renaissance at the Brooklyn Museum 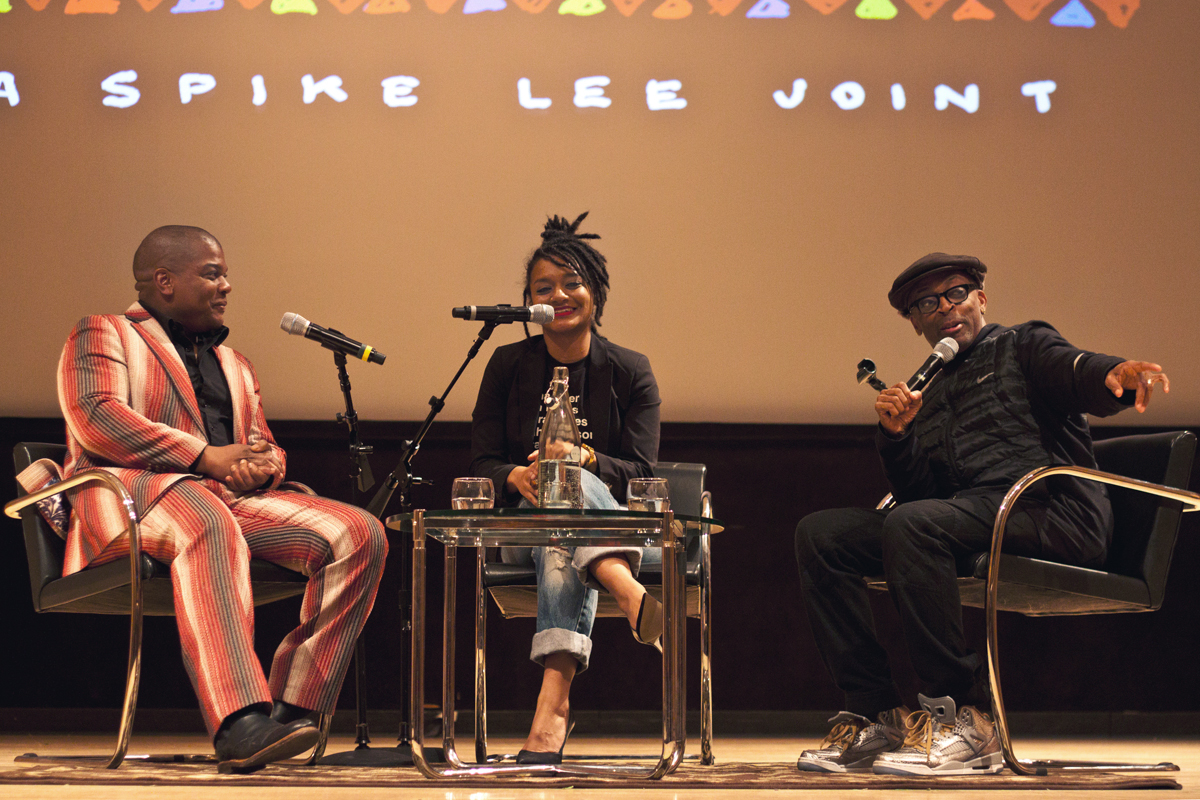 A few weeks ago, I had the opportunity to attend “Brooklyn Renaissance,” a talk at the Brooklyn Museum about the role storytelling plays in the visual arts. The panel featured three of my favorite artists working today: portrait painter Kehinde Wiley, a superstar in the art world; Tatyana Fazlalizadeh, a young multimedia artist whose name you might be unfamiliar with but whose work you have probably seen; and filmmaker Spike Lee, who really needs no further introduction. Now seeing as I am a total pop culture nerd, it took me until just yesterday to get over my starstruck-ness and really digest the points brought up during the event.

The discussion primarily focused on the ideas of representation and collaboration in the visual arts–works by Wiley and Fazlalizadeh are featured in Lee’s latest film, Da Sweet Blood of Jesus. The film, a revenge thriller which uses vampirism as a metaphor for black assimilation and white cultural imperialism, explores appropriation and the cultural intersection of various forms of visual arts.

Wiley’s work, on the other hand, largely subverts traditional ideas on appropriation and replaces European aristocrats with everyday African Americans in the artist’s personal interpretations of paintings by Old Masters. Wiley said he was in love with the great portrait artists and wanted to see “black and brown kids on museum walls.” In his more recent travels, he discovered firsthand that the “leading cultural export of America has a black face”– considering the worldwide popularity of rap and hip-hop culture–and the artist’s current works attempt to respond to this idea.

Similarly, Fazlalizadeh’s “Stop Telling Women to Smile,” a public art project about street harassment, questions ideas on how women are viewed and expected to behave by a patriarchal society. She hopes to continue this project but is also working on a new painting series as well as another project about women of color, trans women, and queer women who are victims of sexual and racial violence. Later in the evening, Fazlalizadeh cheekily called out Lee’s depictions of women in his movies when the filmmaker was asked if he would direct a sort of “Harriet Tubman superhero film.” She quipped, “We’ll have to work on Spike’s female characters first.”

During the concluding Q&A session, Wiley confessed that he creates his art for “selfish” reasons, and his works have very little to do with the outside community until they are actually out there. “I’m not a politician, I’m a painter,” Wiley stated, though he added that fortunately, what he’s interested in involves “fractured and different points of view, and that’s what you see on the walls.” This admission was rather interesting in light of Lee’s earlier statement about film being “the collision of art and commerce,” as well as Fazlalizadeh later comments about her aim to make work that humanizes women. “We’re not saints, we’re not princesses, we’re not sluts. We’re human beings,” she said. “It’s about teaching kids how to be good people, not good boys or girls, and making work that reflects that.”

The following is a clip from the Q&A session that addresses storytelling and representation in regards to making work based on someone else’s experiences. The first voice you’ll hear after the question is Lee’s, followed by Fazlalizadeh, and ending with Wiley’s response.