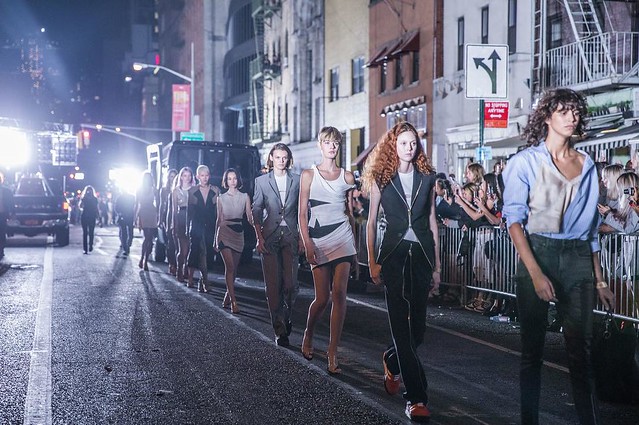 New York Fashion Week has taken to the streets—and not just with killer street style. If you were lucky enough to be in lower Manhattan last Saturday night (or unlucky enough, depending on your opinion of the fashion set) then you might have seen the traffic-stopping spectacle that was #WangFest.

Interestingly enough, Mr. Wang first showed to the public in Manhattan, while reserving another show in Bushwick, Brooklyn for the industry later in the evening. Commentary on where the fashion industry is going, perhaps? The people don’t want trickle-down fashion. They want to see it, pick it, and wear it. On their own terms.

Similarly, Mansur Gavriel took to the streets in millennial pink. While the industry perched atop rose-colored bleachers, MG’s runway extended onto the sidewalk, where fans and pedestrians alike were treated to a first look of the brand’s clothing. Just like MG’s shoes and bags, we want these clothes, and we want them now. (I’ve got my eye on a canary yellow coat in particular.) Lucky for us, links to shop the collection went live during the show.

In a world where we can get everything we need and most things we want with the click of a button, is the standard fashion model extinct? And if so, what’s next? While some criticize the lack of innovation of NYFW, there’s something to be said about the digested fashion we’re given. Paris still holds on to couture, and while that is an art in and of itself, it’s not prudent to wear priceless handmade frocks while waiting for the L train. So on the flip side, Wang gave us streetwear (on the streets) while Mansur Gavriel offered see-now/wear-now. And in an age of immediacy, how can we label these guerrilla tactics in fashion as anything but innovative?